Hello my bloggy friends.  It has been a while...I certainly haven't forgotten about you!  I swear!!  Much has changed since this past fall.  As mentioned in my last post (Smoky Mac N Cheese, anyone?), life has changed a bit......What was suppose to have been a 2 week vacation back home in New England, turned into a more permanent move.  This has left us in somewhat of a holding pattern; we haven't really determined what are next step will be. 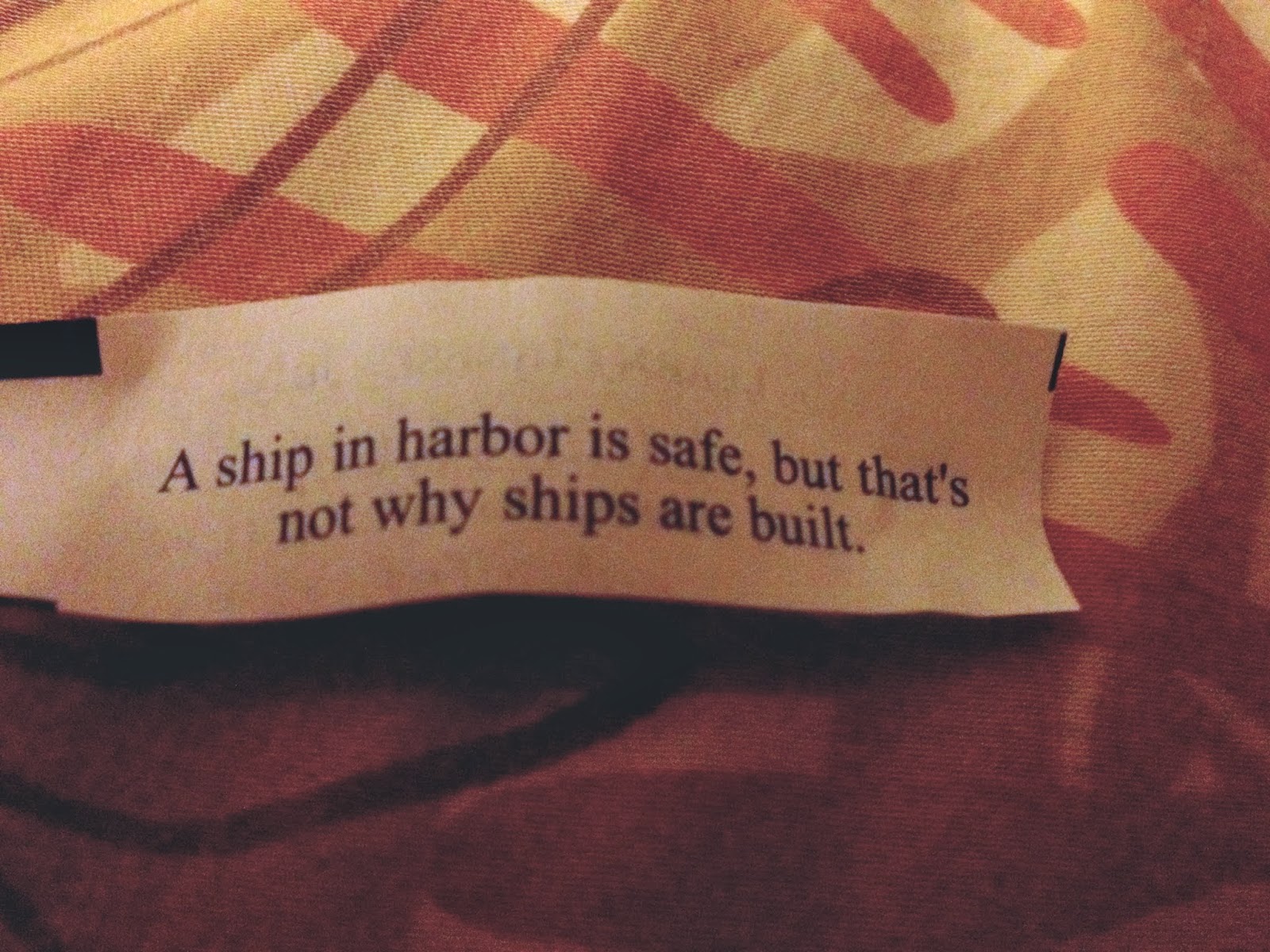 Here is a little of what we've been doing to pass the time...I have a lot of pics, so I'm breaking this into a two-part post. 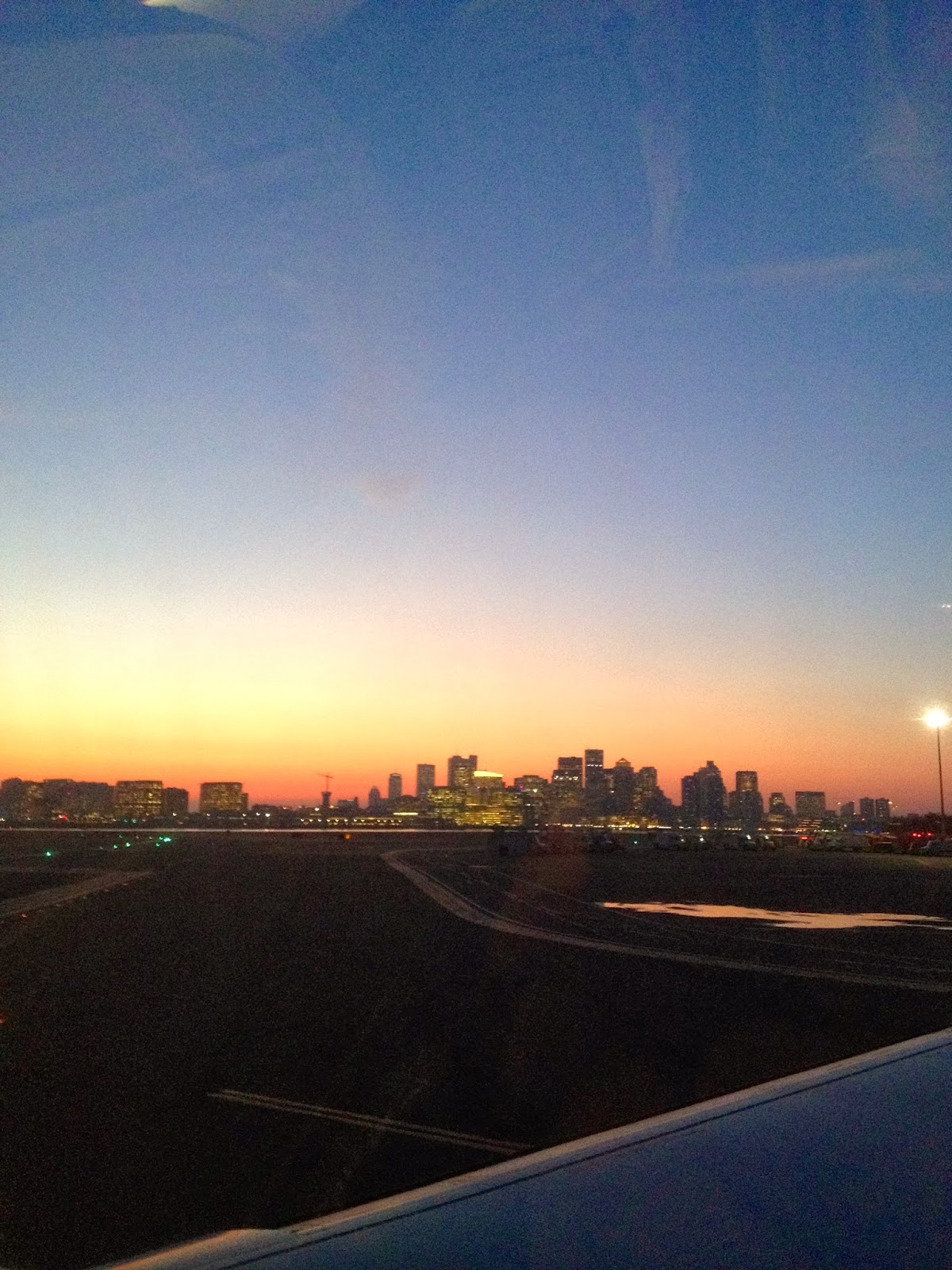 Boston's skyline at sunset.  We fly back to Canada to retrieve of belongings from our storage unit. 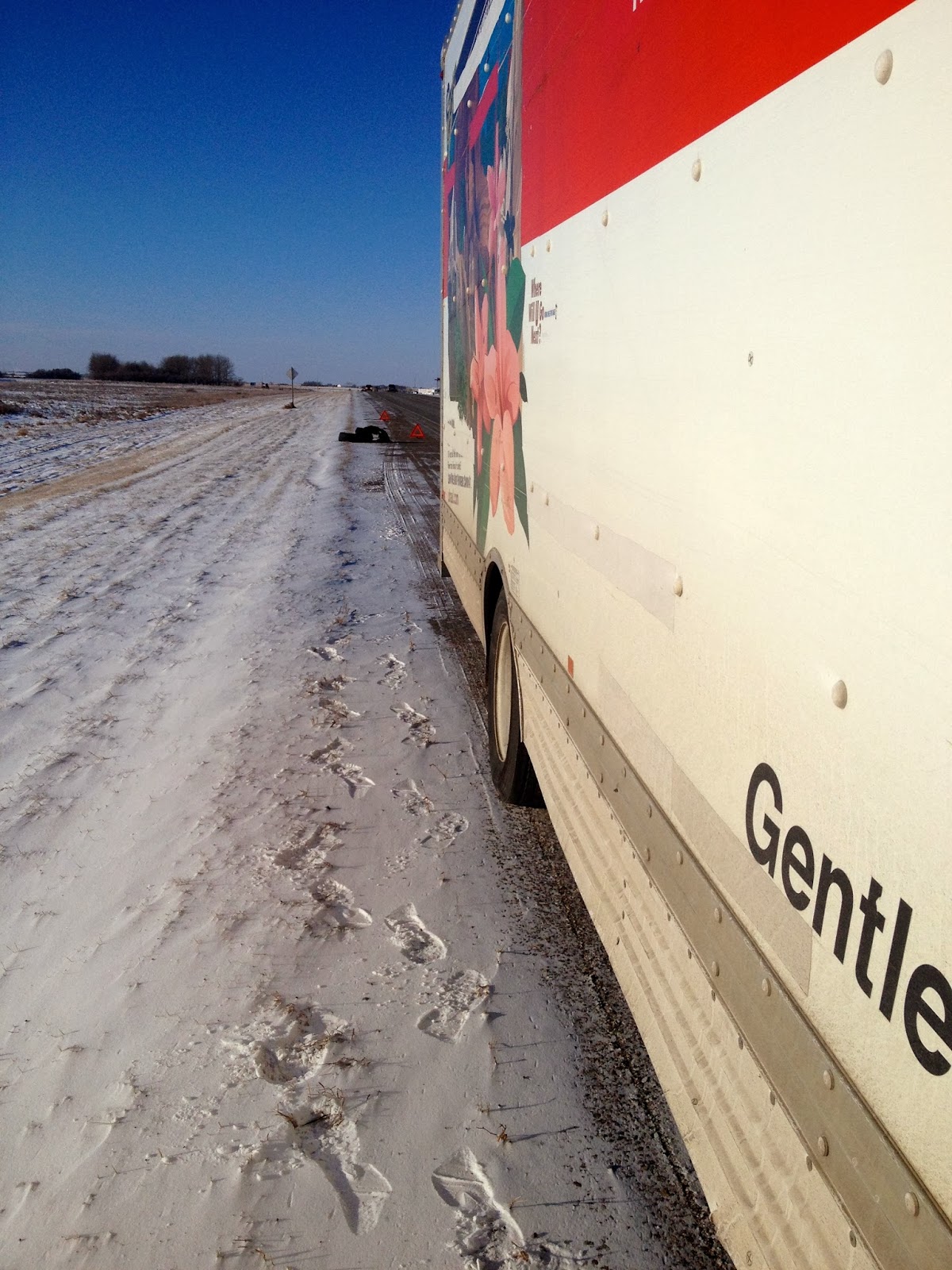 Once said belongings were loaded into our rented U-Haul....we lost a tire....in the middle of Nowhere, Saskatchewan...... 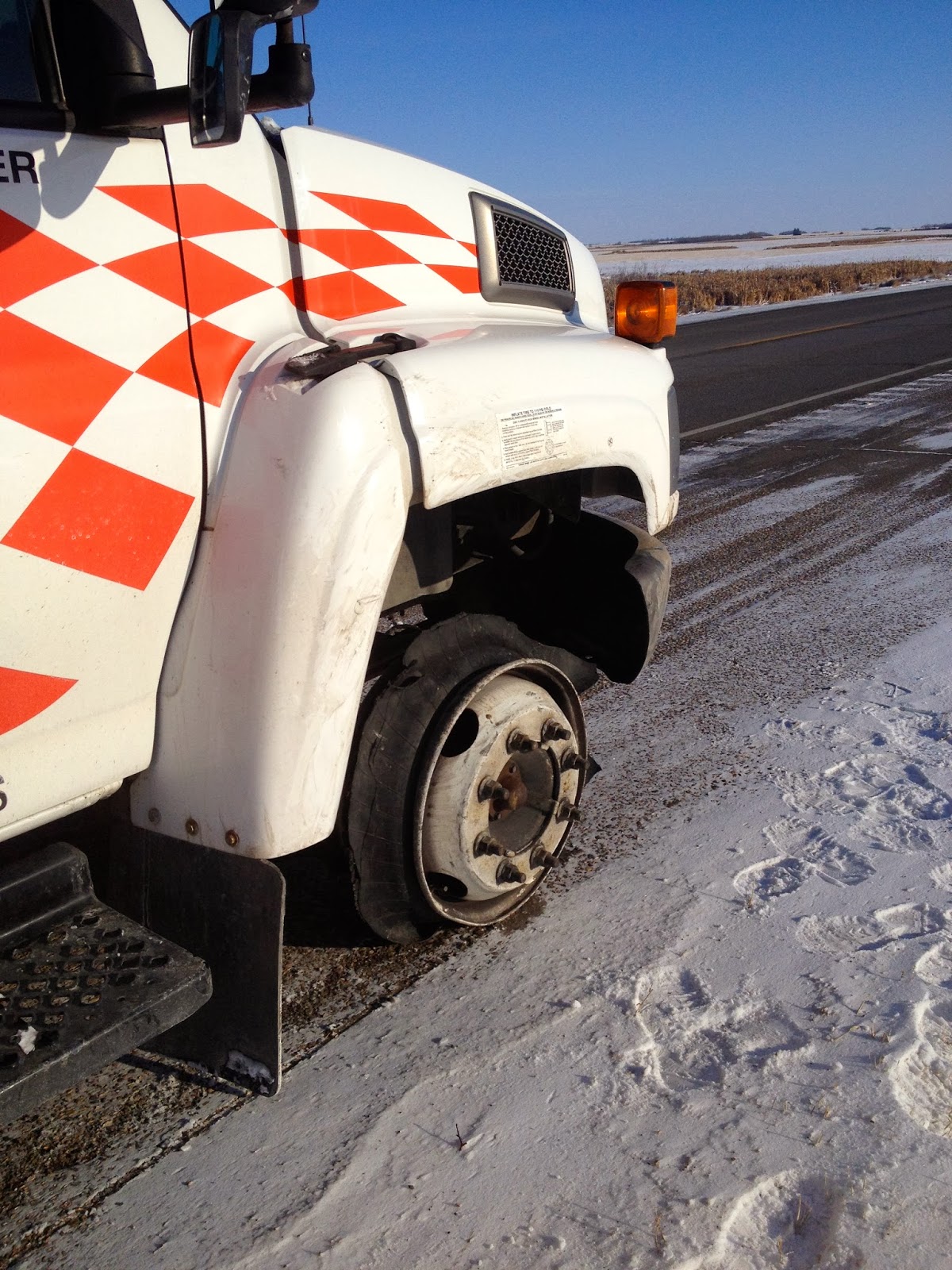 ...during the coldest temps thus far this winter, -30C plus windchill......and ALL our winter stuff is PACKED IN BOXES! 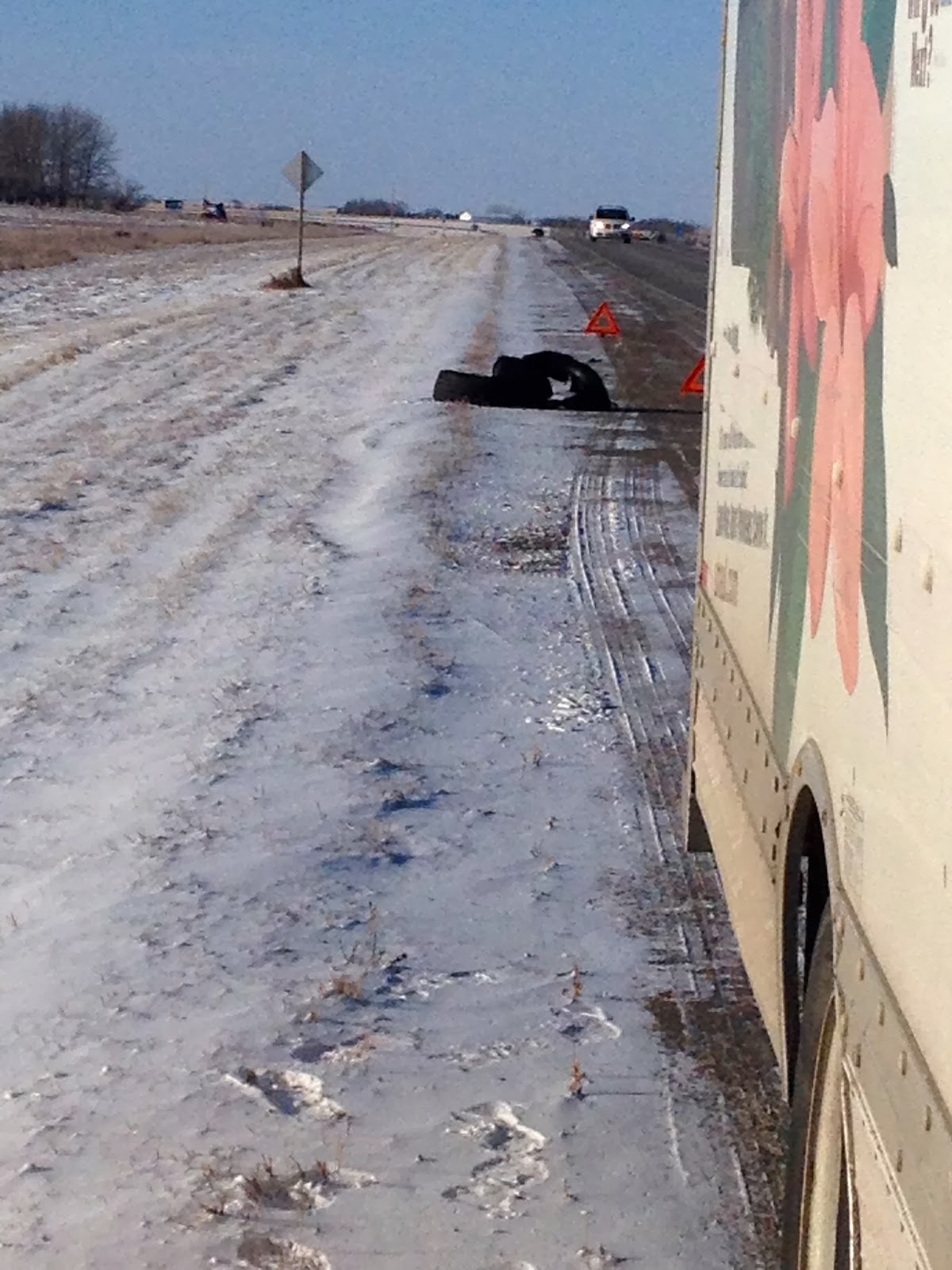 No problem!  A panicked call was made to the 24hr emergency U-Haul God, who was in sunny Arizona and could not imagine it being as cold as it was where we broke down. 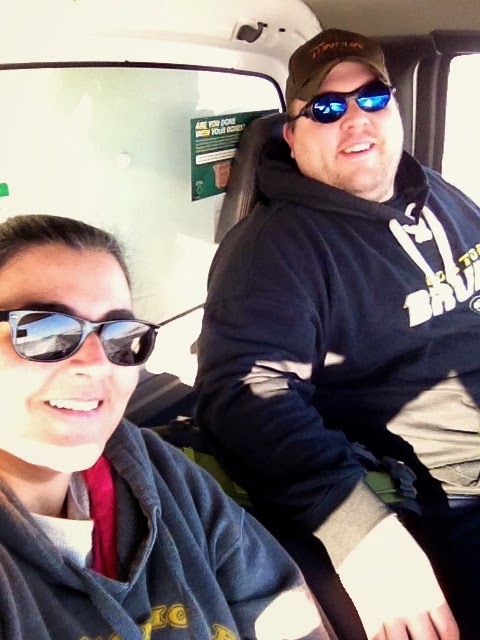 We tried not to get too stressed out.  When we explained to the local tow truck that we were positioned just outside town, next to a grain mill-train stop on one side of the road - and across the from an empty tractor trailer being used as a sign for a local business, he replied, "I know exactly where that is". 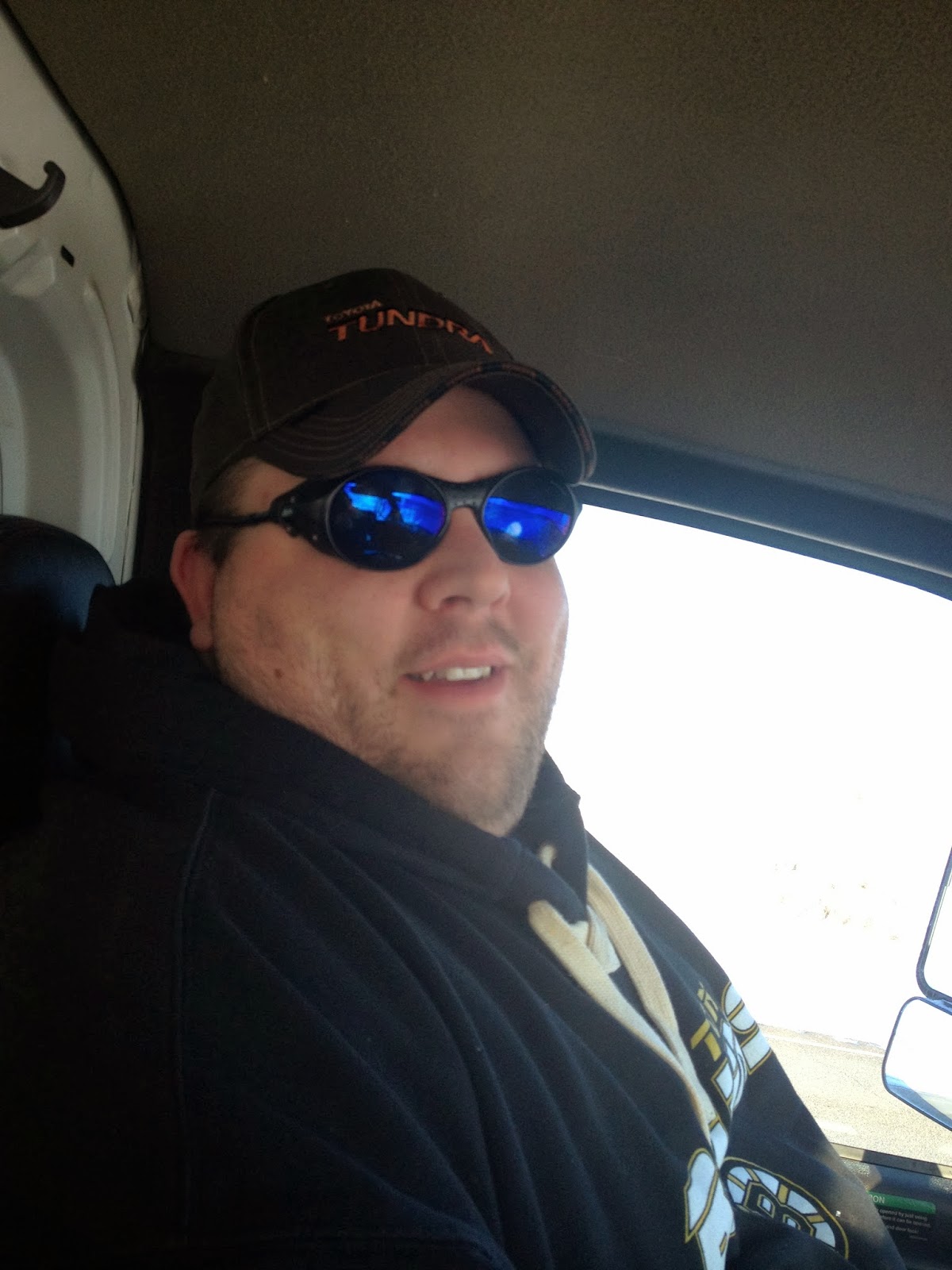 My blood sugar was low....I looked over at Sean and began to picture him as possibly having to be my dinner if help didn't arrive. 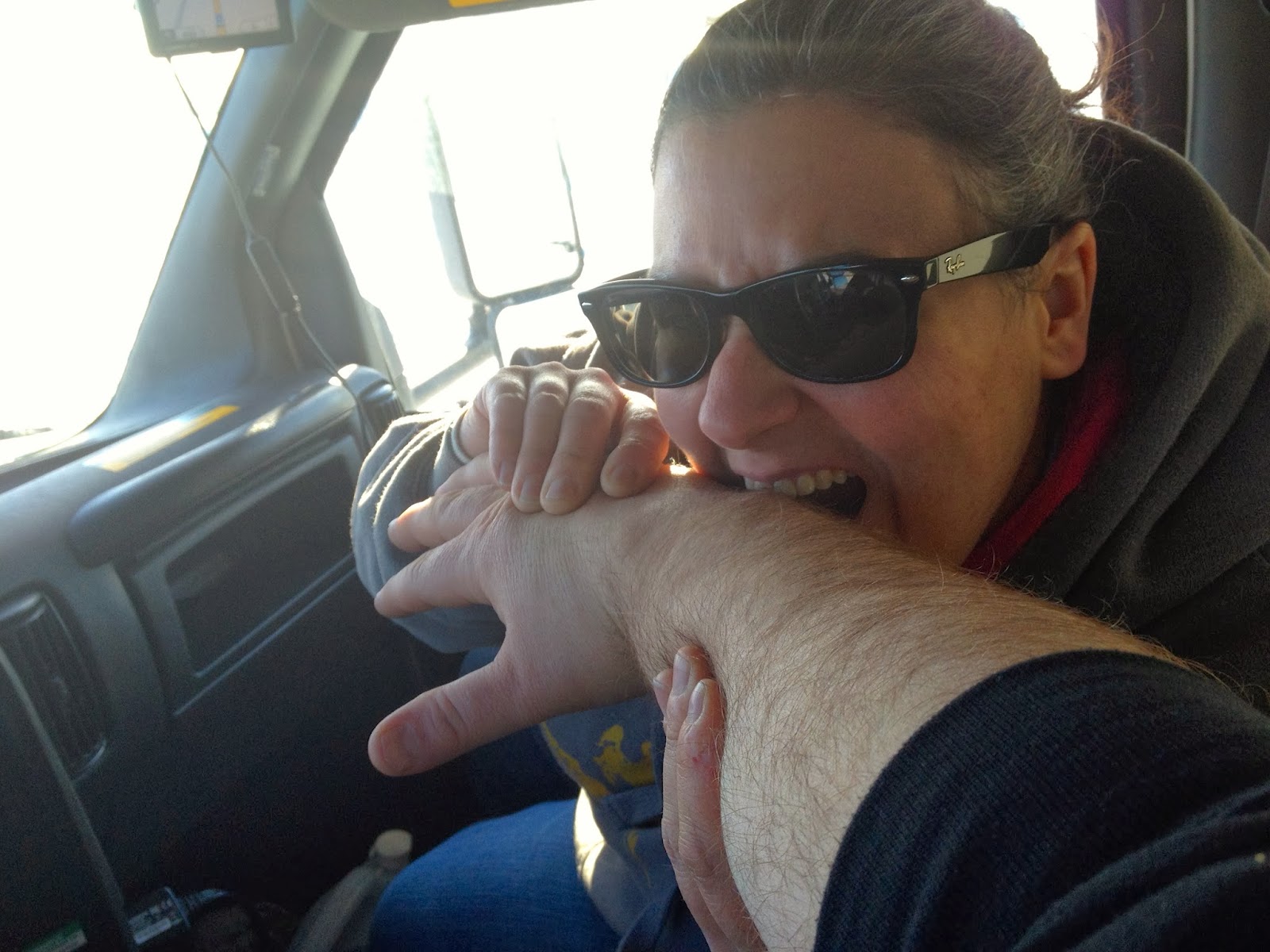 We discussed it....if it came to pass, I would eat him to survive and not vice versa. Again, low blood sugar...... 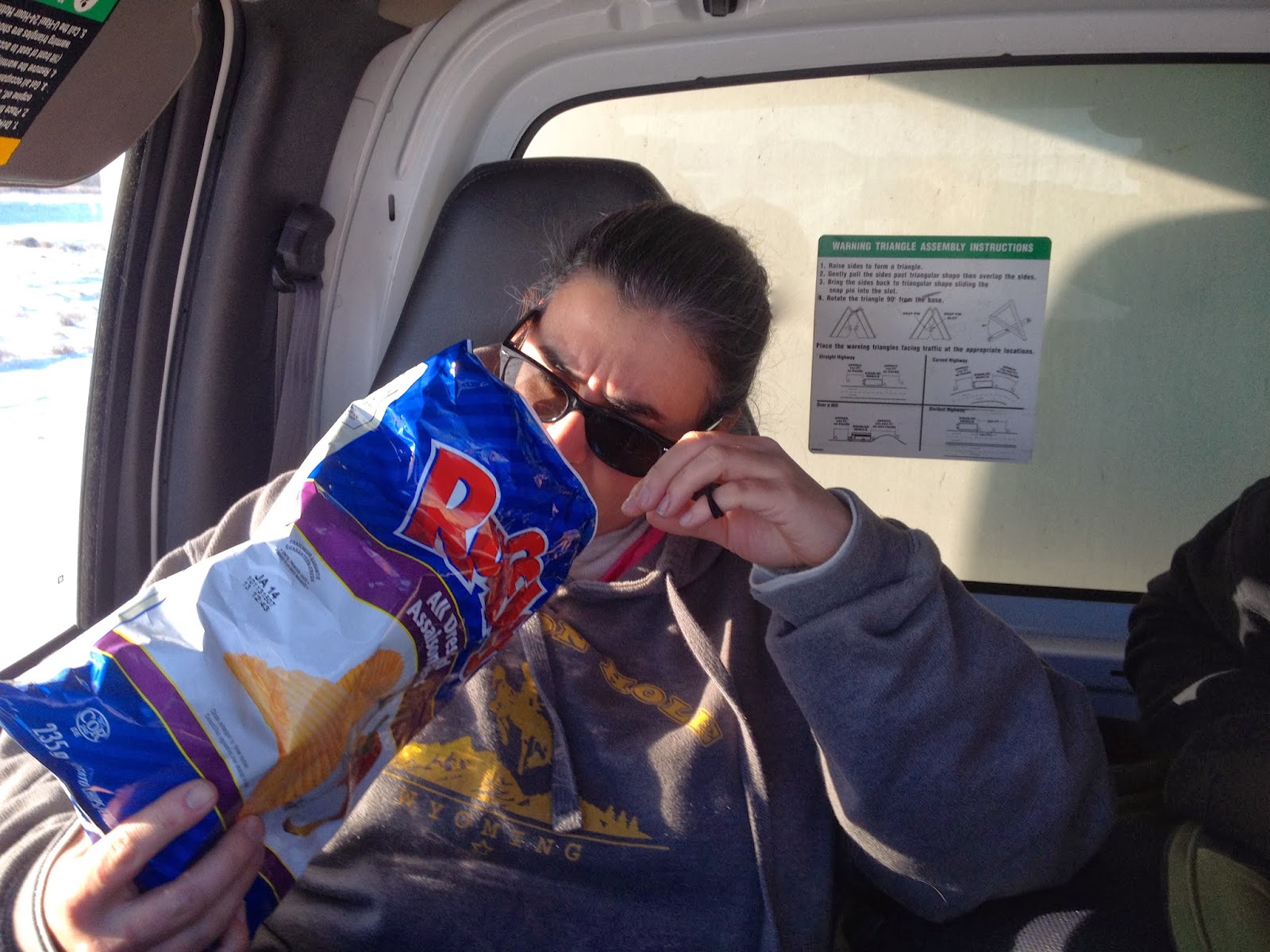 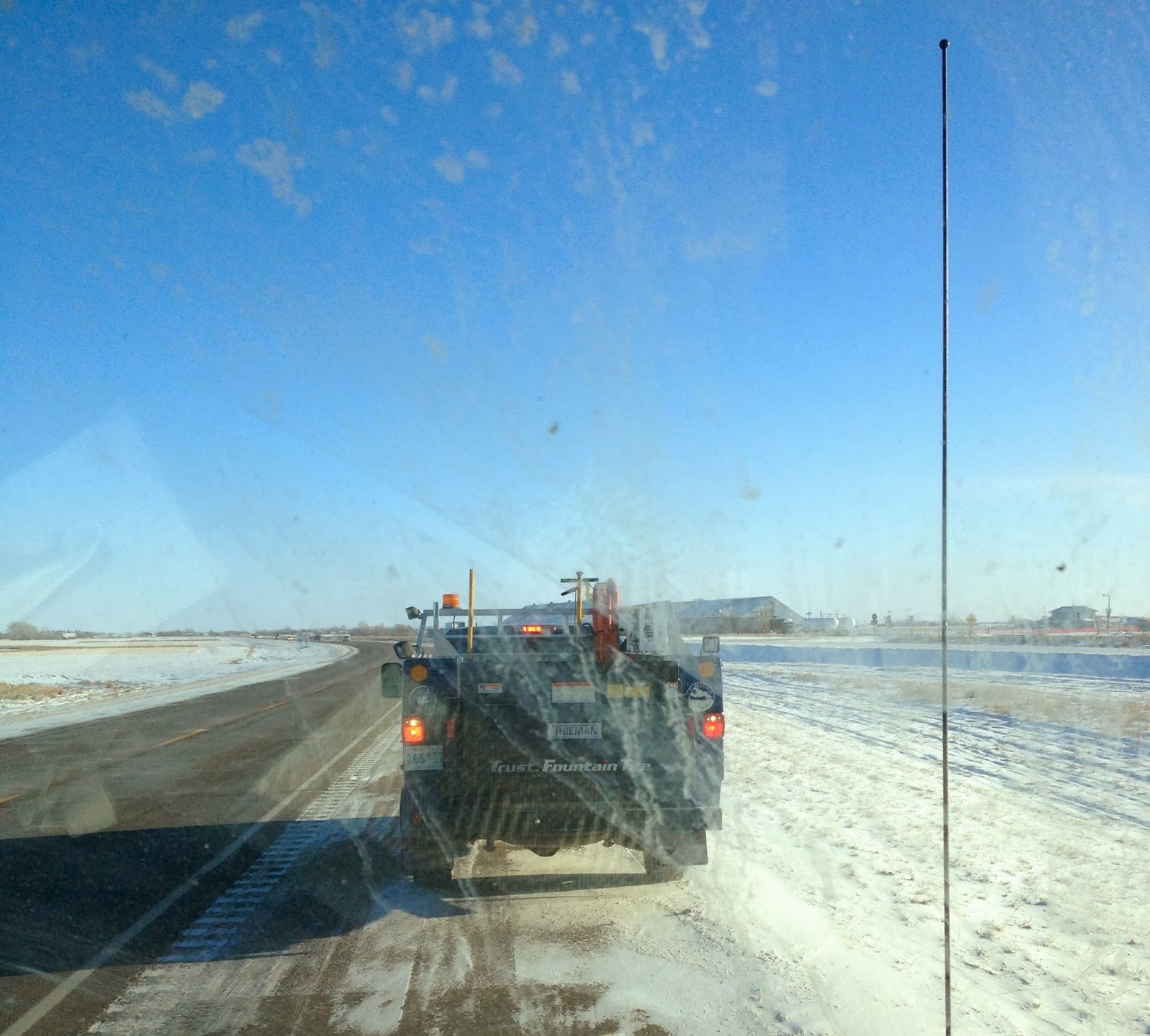 Finally, after a few hours our help arrived.  Our tire was changed by a nice young man, and we were soon on our way. 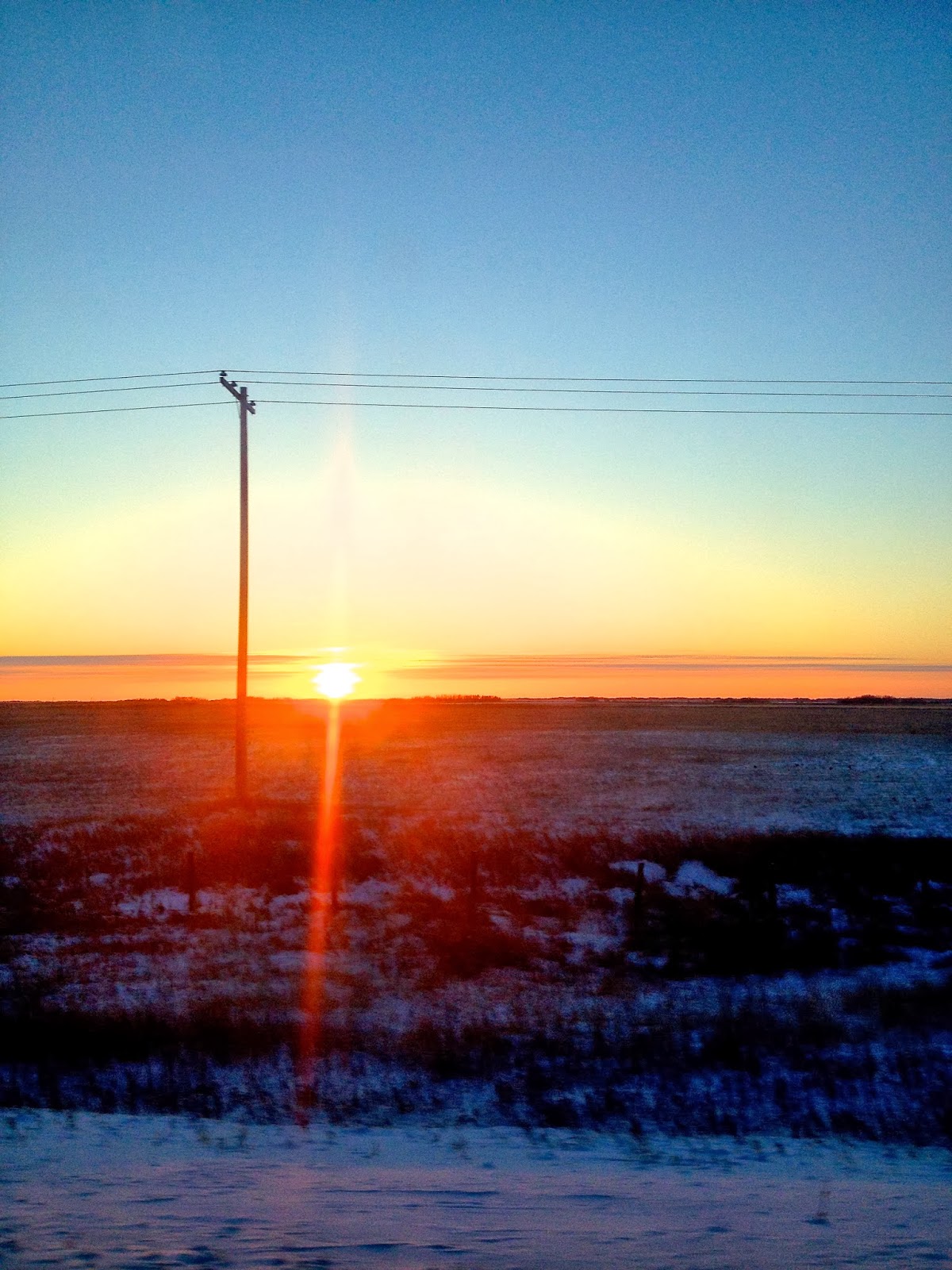 Our last Canadian sunset.  We soon crossed the border into Pembina, MT and the cold air followed.  It got a bit slick and snowy around Eau Claire, WI so we had to pull over and wait out the weather.  Other than that, no major issues.

December 2013
Once are stuff was loaded into ANOTHER storage unit in RI, we went up north to Maine for a few weeks to play in the snow. 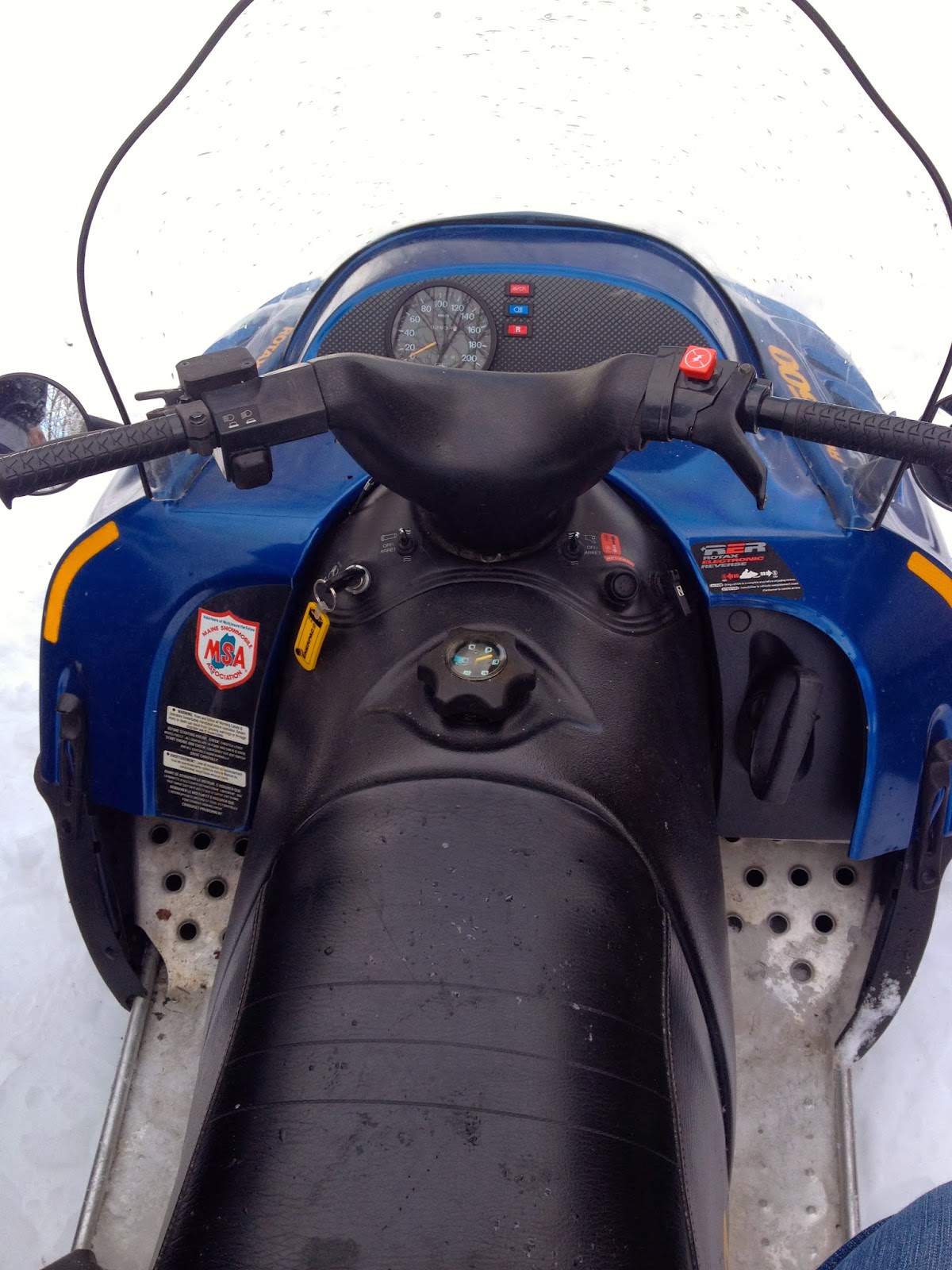 Where Sean's family lives, this is how they get to and from their house.  They live on the top of a hill, the road going up to their house is a private gravel road, it is plowed, but can still be pretty slippery.


I took this video with my iPhone, and don't know how to format it to a full screen.  Bear with my skinny video. 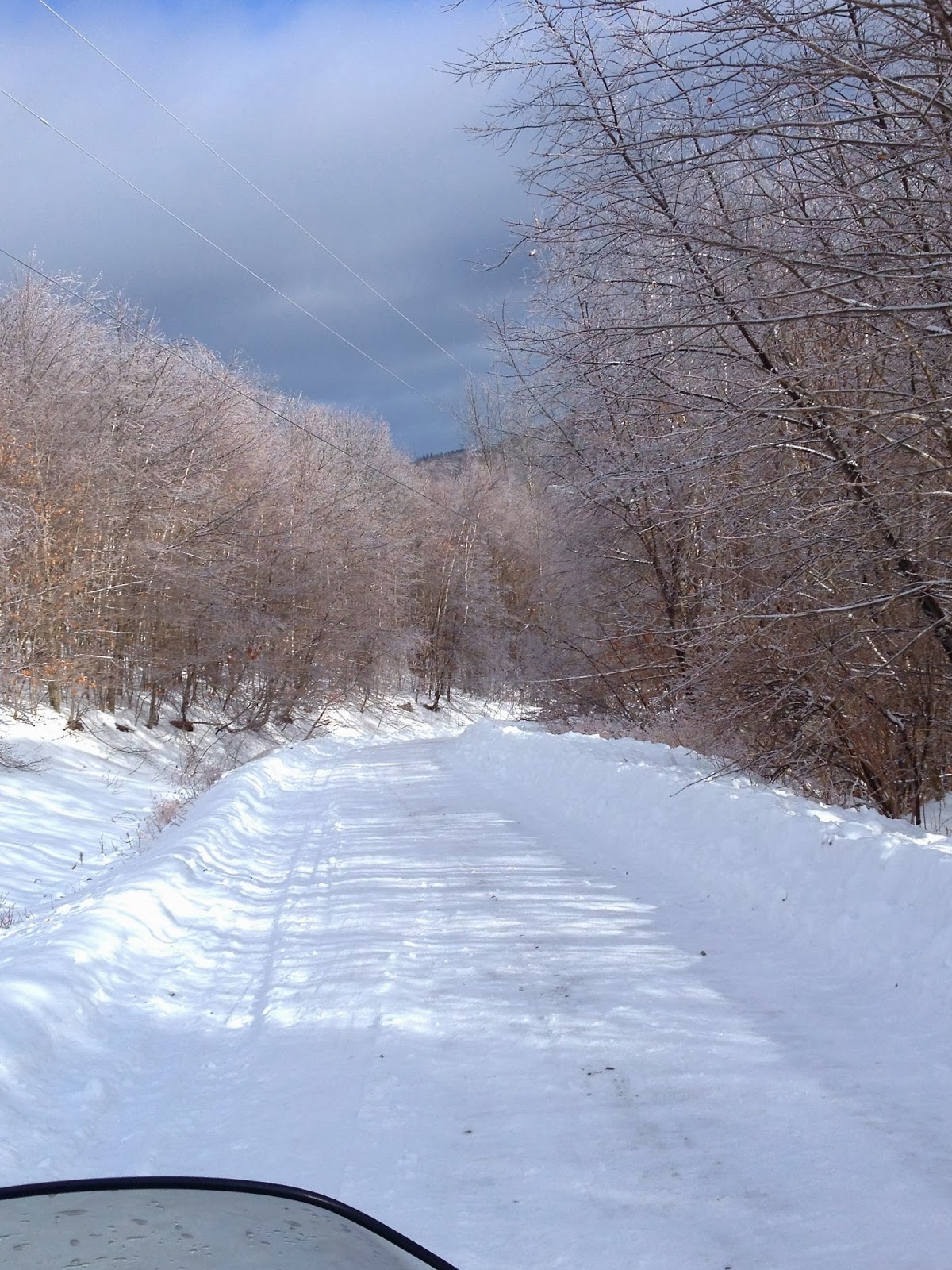 A still shot of the road. 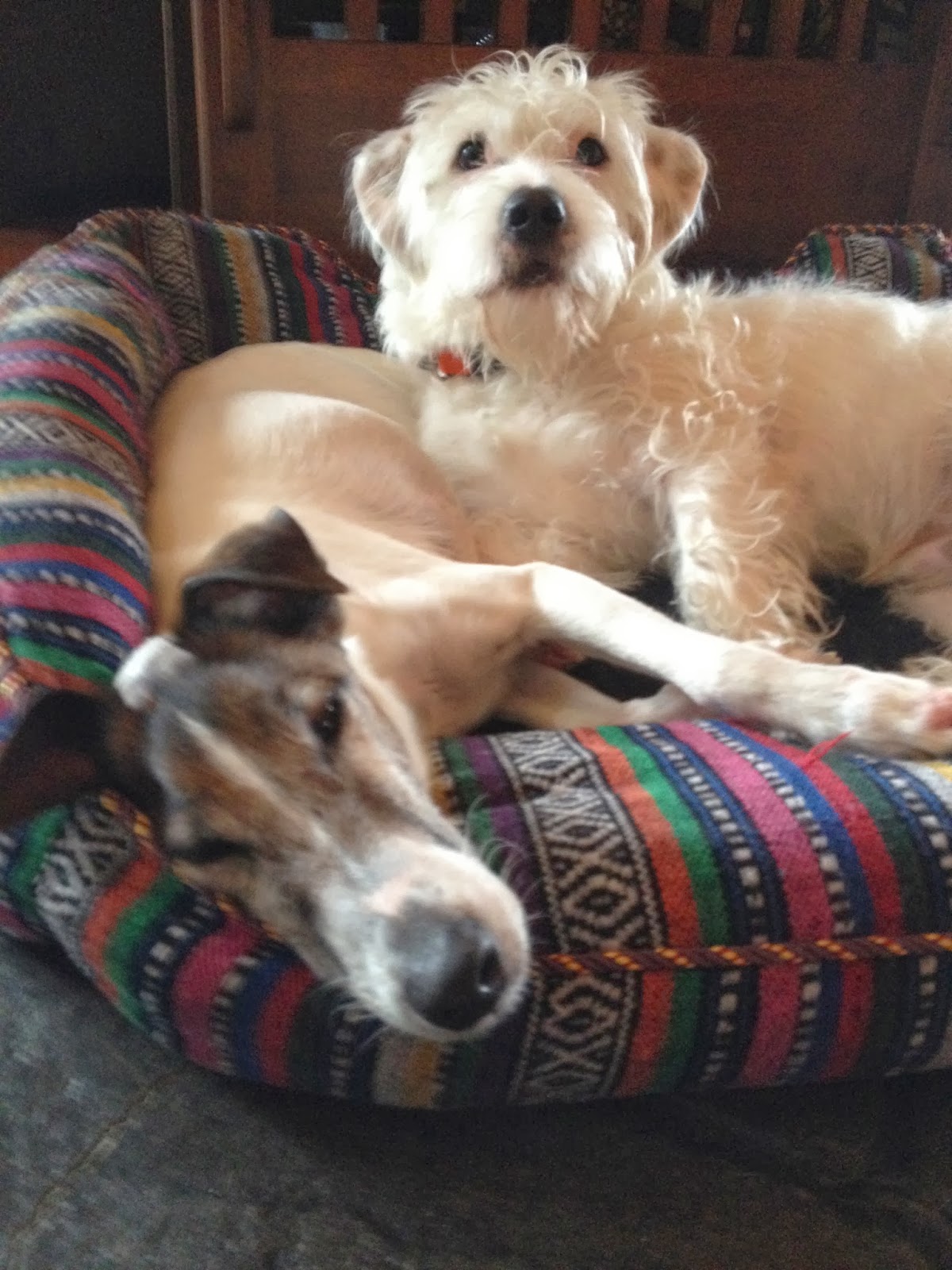 Notch, welcoming his new Uncle Wally" to the family!

January 2014
A spontaneous road trip took us through Scranton, PA.  Me being "The Office" geek that I am, I made Sean stop and retrace some of the places from the TV show. 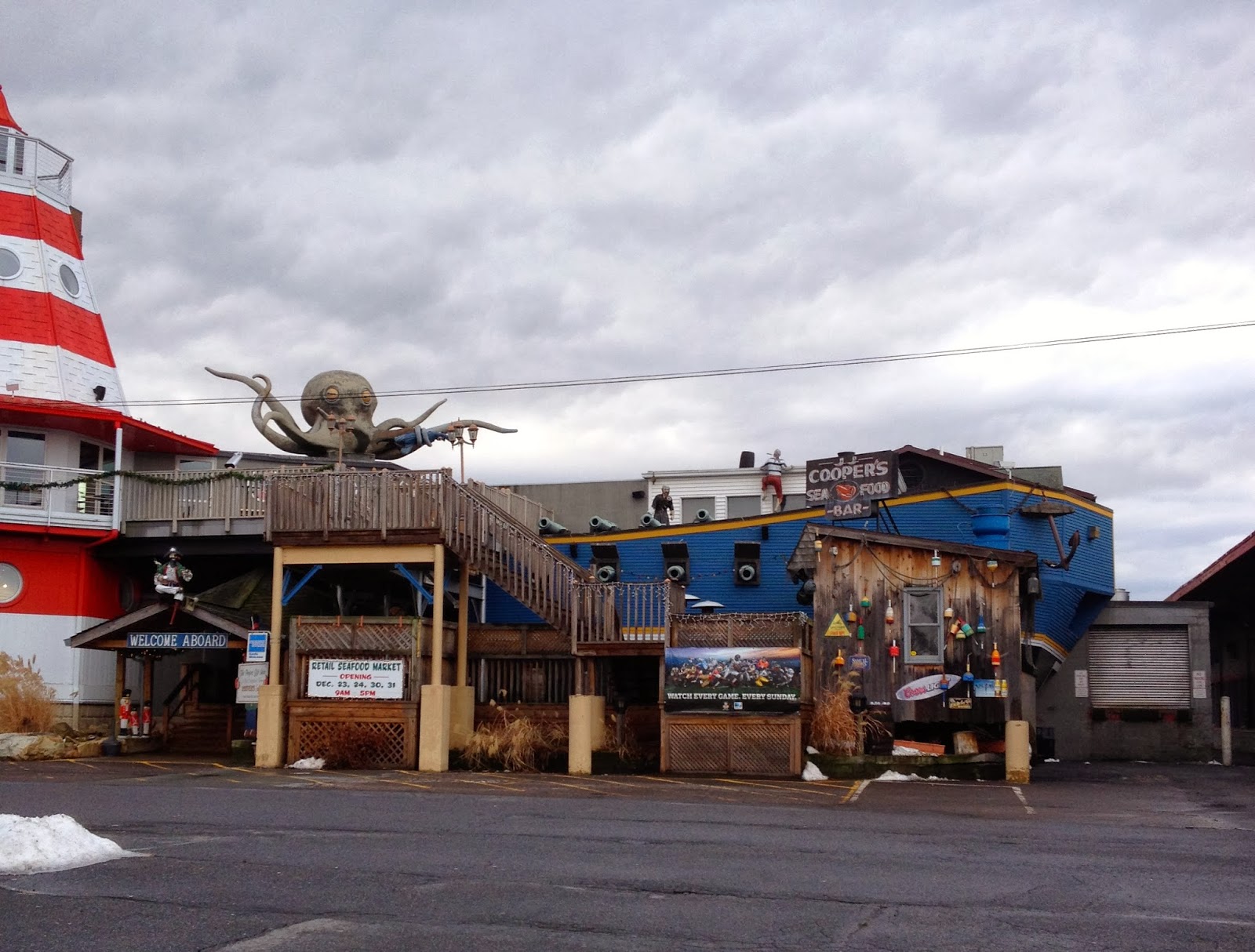 Cooper's Seafood House, Scranton, PA.  In the episode "Business Ethics" Michael takes Holly to Cooper's for lunch, and in other various episodes Cooper's is referenced by other characters.  We had lunch here, it was good.  Inside the restaurant there walls are lines with tons of hollywood and historical memorabilia.... one could spend hours just taking it all in. 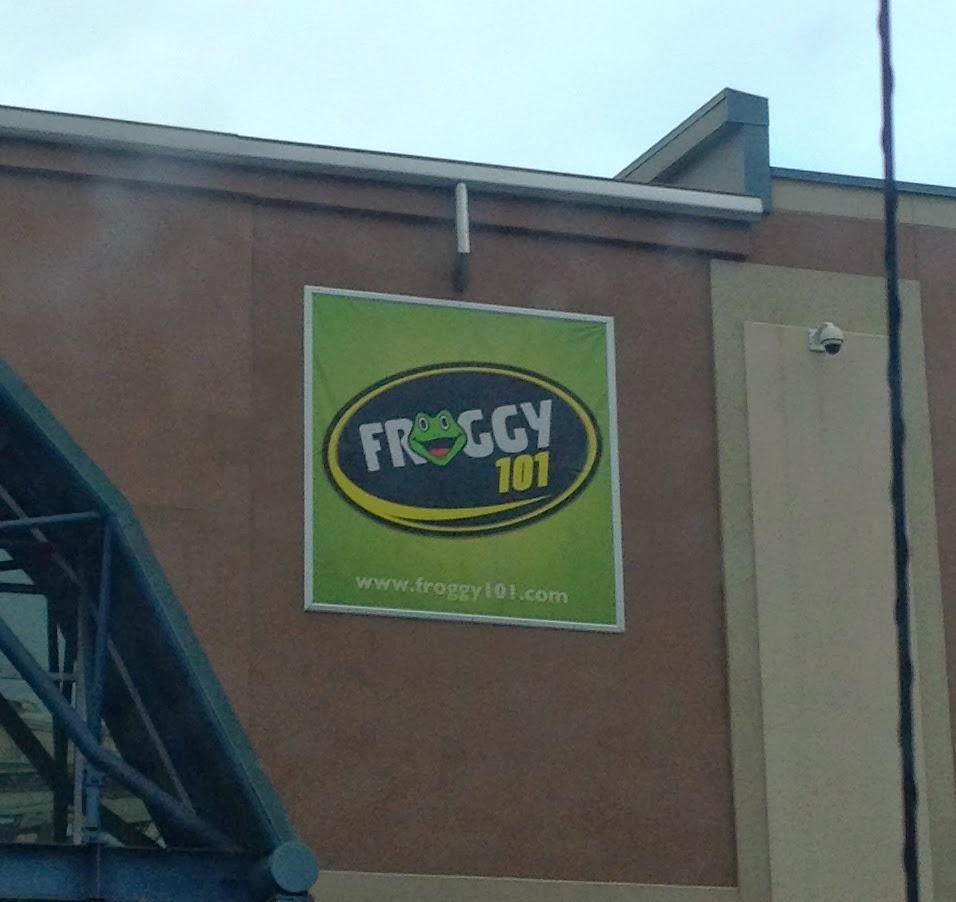 A Froggy101 sign on the Steam Town Mall......it DOES exist!!  We didn't go inside, but there is a Dwight Schrute painted onto the glass elevator, and Office murals throughout the mall. 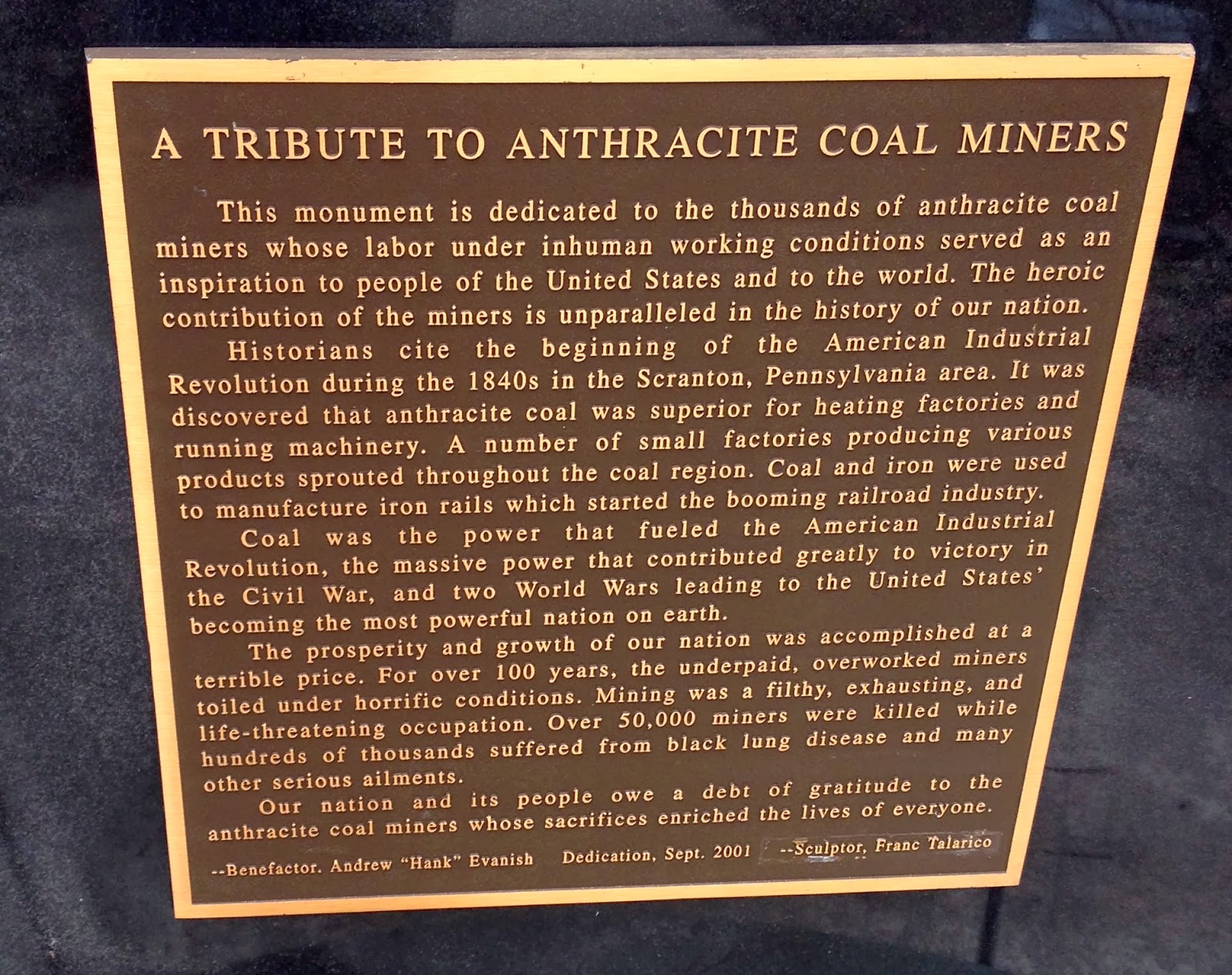 This monument was located near the Lakawanna County Coal Mine Tour, which was closed this time of year.  This is where the coal elevators are located, as referenced by Michael in the episode "Health Care" 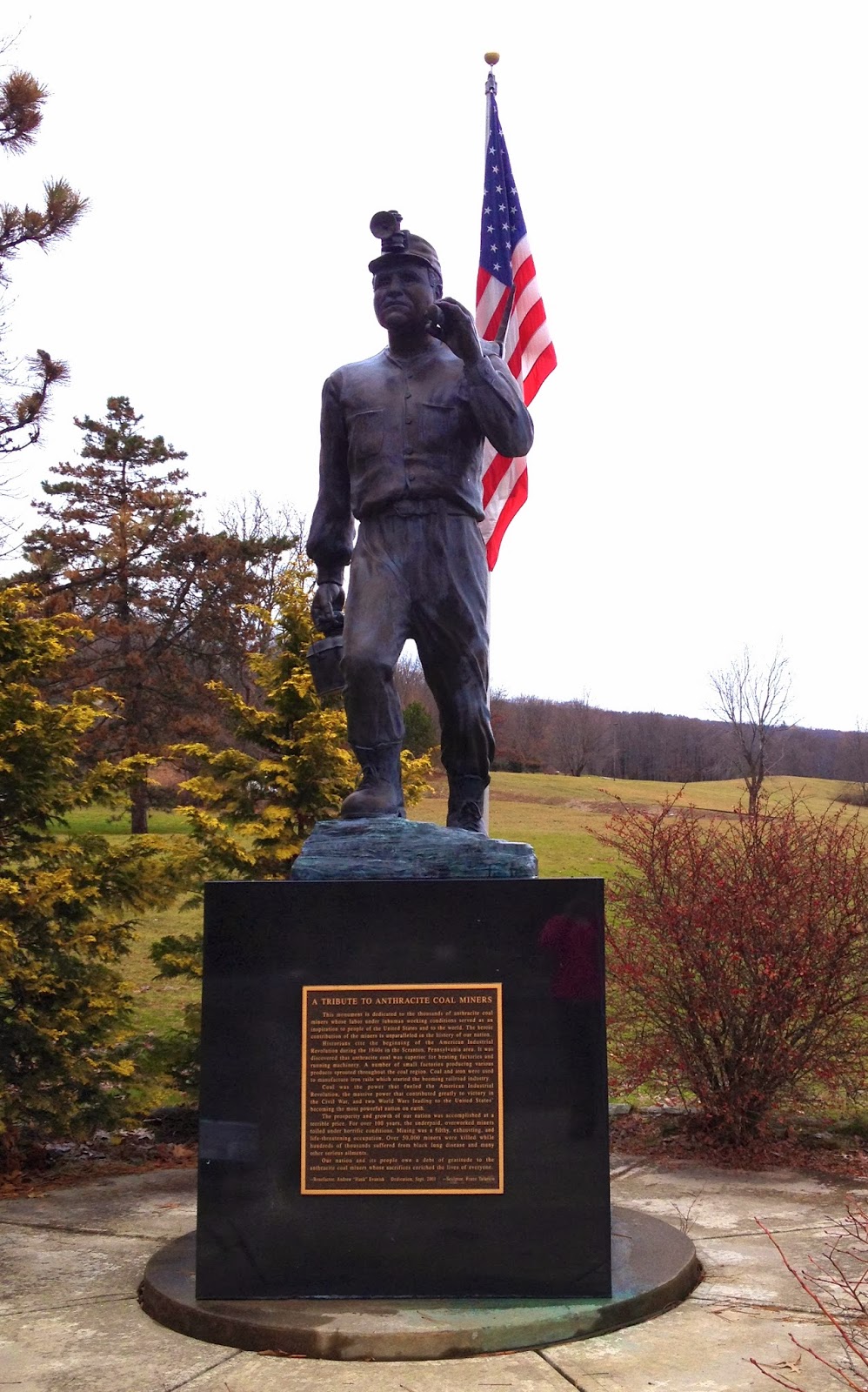 I would like to experience the tour someday, it sounds interesting....descending 300 feet below into a coal mine via a maze of tunnels and chutes from the 1860s. 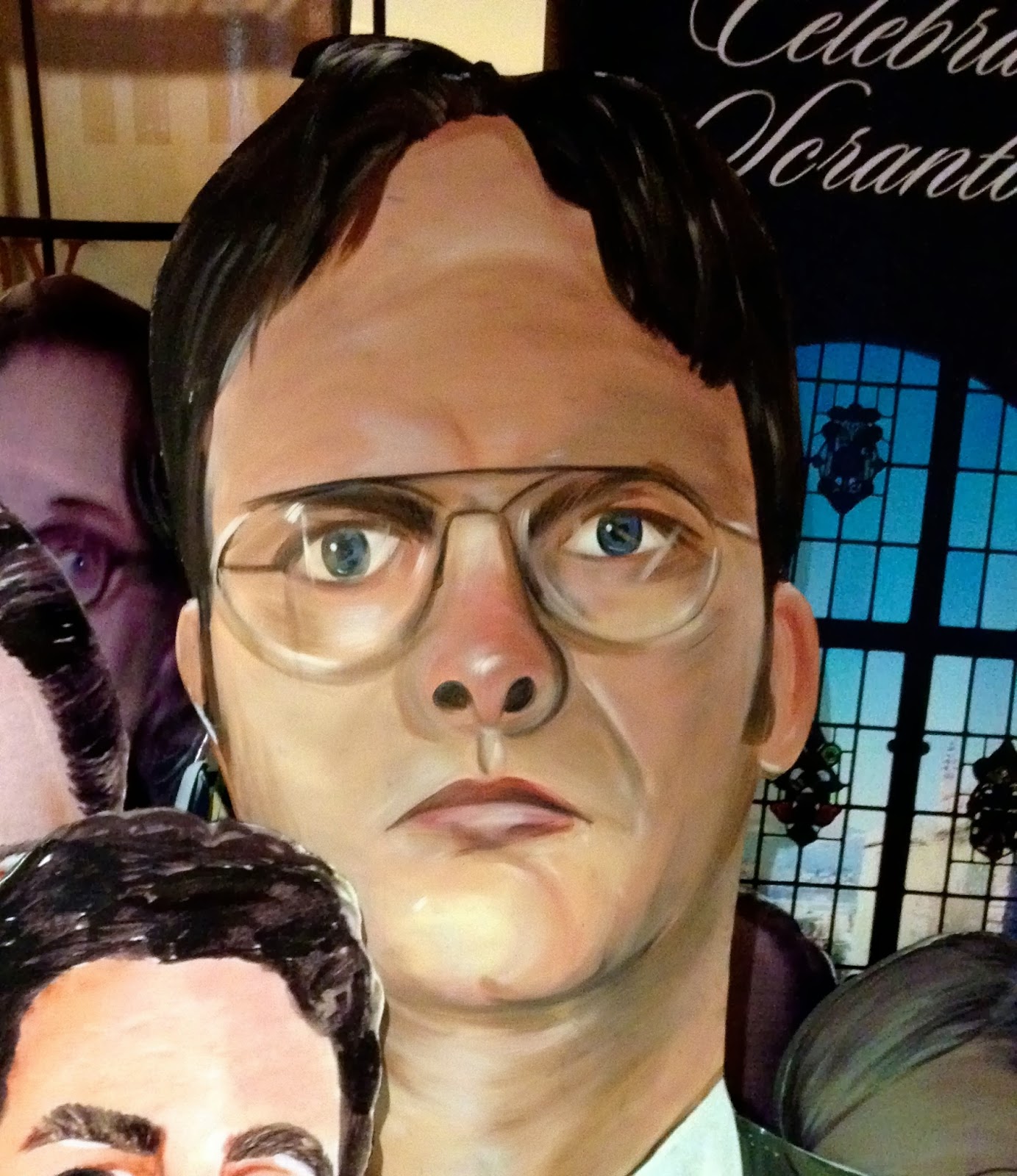 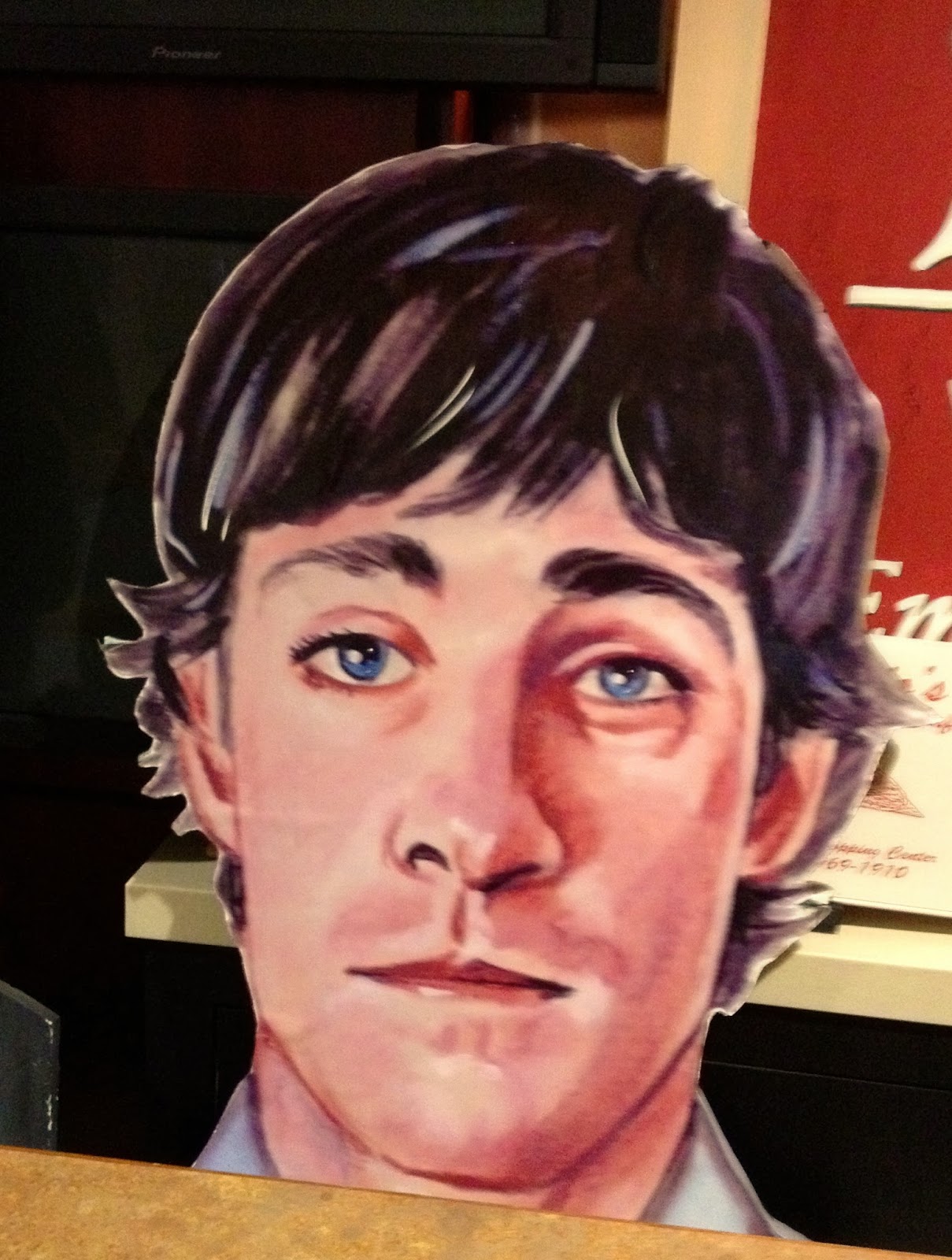 Also displayed were these big giant Office heads!  Local Scranton artists were commissioned to create these for the shows wrap party, which was held in the Scranton Visitors Center. 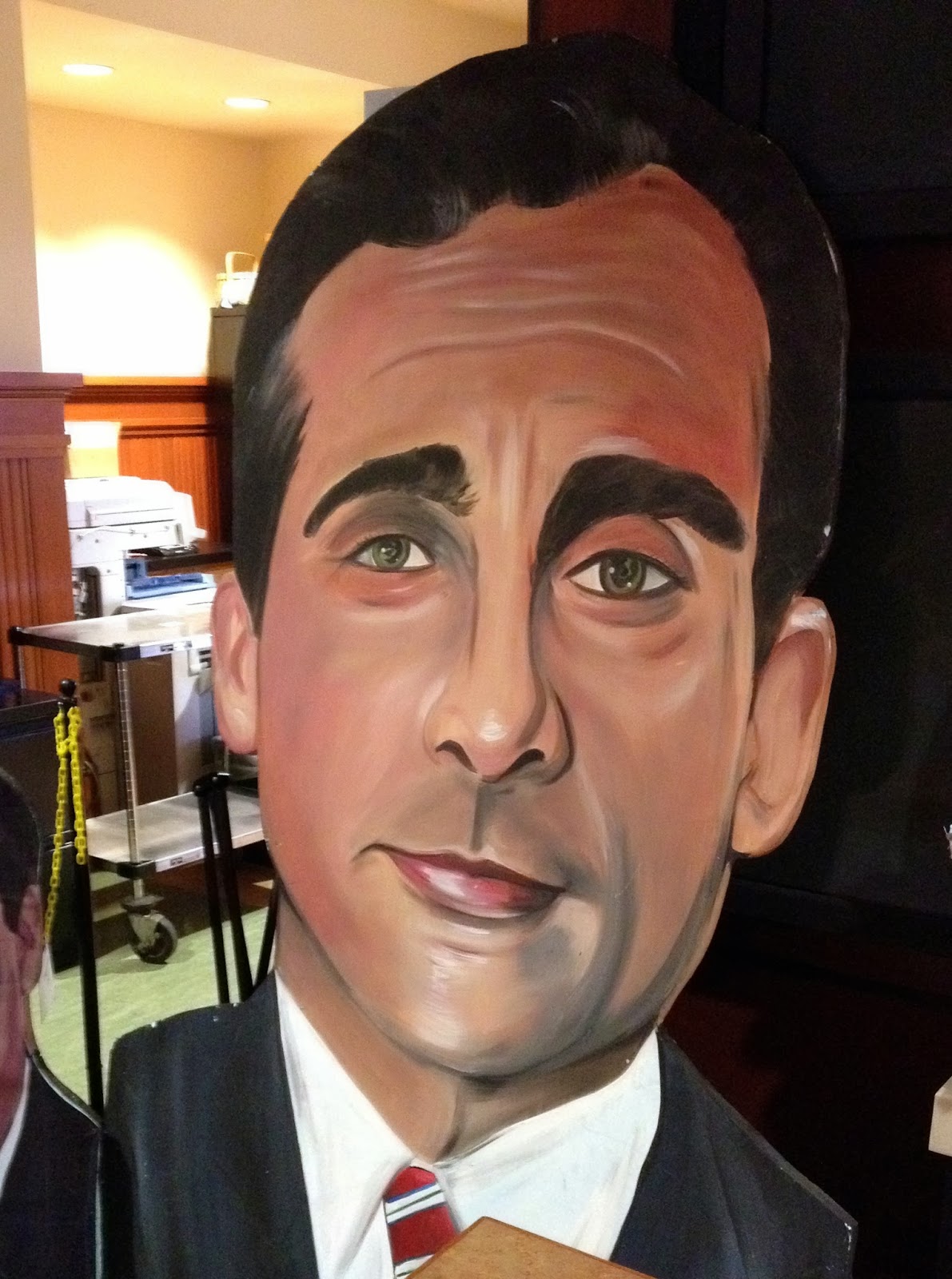 If you are ever in the Scranton, PA area, there are several websites that offer Office Tours.  We didn't have the time to hit all the spots....maybe next time. 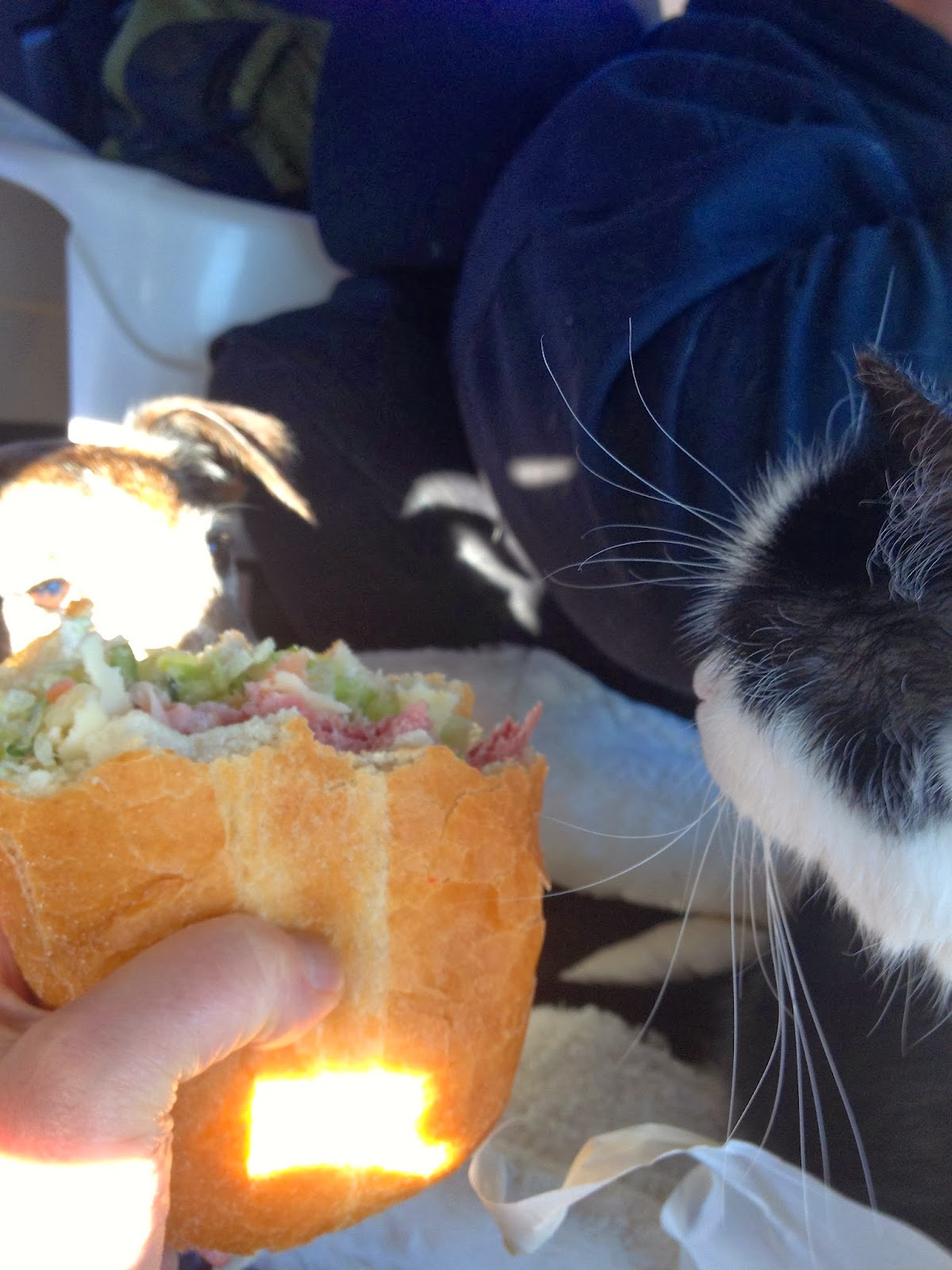 We discovered Nardelli's Sandwich Shop in Connecticut....OMG what a sammich!!  Notch and Duke would not let me eat this in peace!  Usually I can unlatch my jaw like a snake and inhale a sub, but I was not worthy at this juncture....I only could eat half.  I mean, look at that bread!  It was amazing.  Truly amazing.

Keep tuned for the follow up to this post, part 2, for more random pics and prose.
Posted by Unknown at 10:00 PM