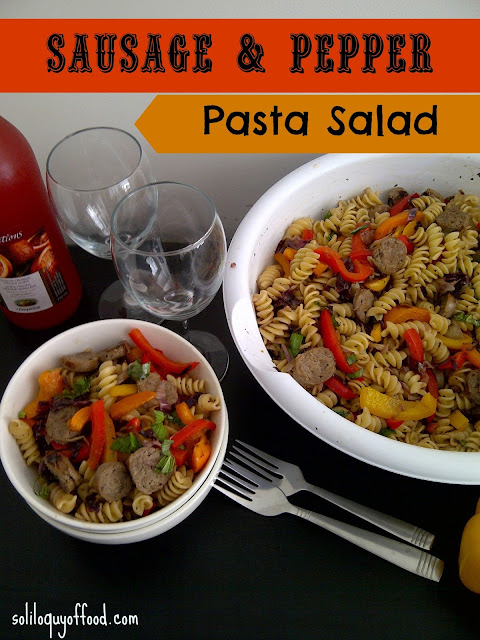 It was blazing hot the week I made this, 94 degrees in the Canadian Prairie is H-O-T! Considering that 9 months out of the year it is an arctic tundra-like environment, I'm not really going to kvetch much about the heat.  Plus, I am under the age of 70, so kvetching about the weather is not acceptable. 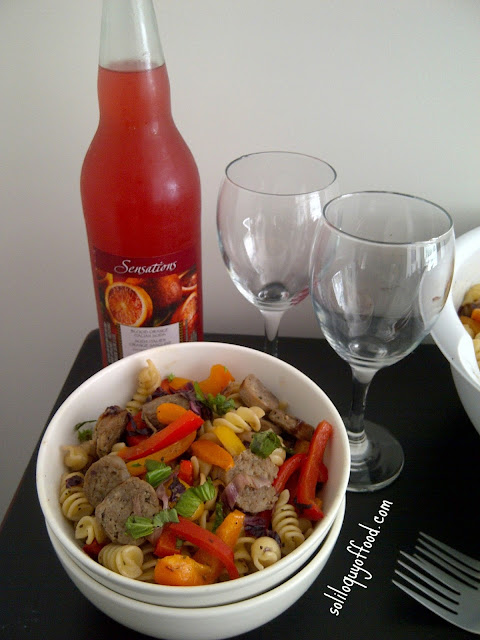 We had this as our Fourth Of July dinner with corn-on-the-cob and American (Nathan's) hot dogs.  FYI, as stated in my 22-random-facts-about-myself post, I KNOW what's in a hot dog....I still enjoy one (or 4)  in the summah!!

The Fourth is just another day in Canada - their holiday is celebrated on July 1st, Canada Day.  On this Fourth Of July we watched the fireworks in NYC, on TV,  and repeatedly chanted U-S-A(!), U-S-A(!), U-S-A(!).  S then lamented (as he does most years) on why he didn't get the costume Carl Weathers/Apollo Creed wore in Rocky IV, which is "available in his large-man-frame size".

I very lightly dressed this salad with some prepared balsamic vinaigrette, I used just 1/4 cup of dressing - plus 2 TBS of vinegar - in hopes of keeping the pasta from drowning in dressing.  Additional dressing can be tossed into each serving if desired. We topped ours with  a few shakes of Frank's Red Hot - if you like hot sauce, you must try it this way! 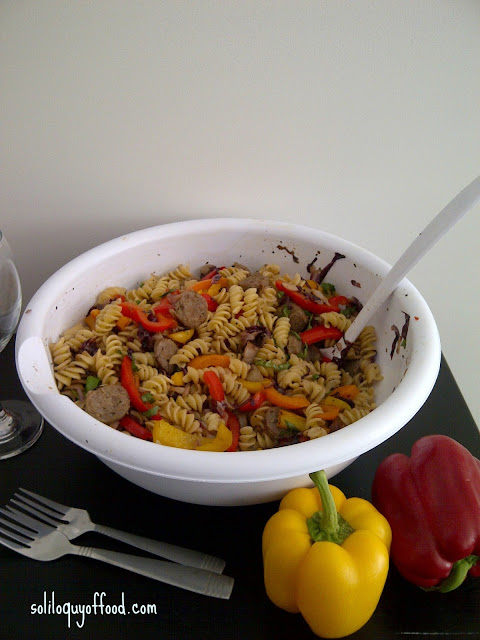 I don't have access to a grill or a grill pan....if I did, I would have grilled the sausages and the vegetables.  The charred smokiness would have been a great addition to this pasta salad.  I found a lean chicken Italian-flavored sausage - but feel free to use your favorite variety.  For the radicchio, I finely shredded it and gave it a quick toss in the pot until just wilted. 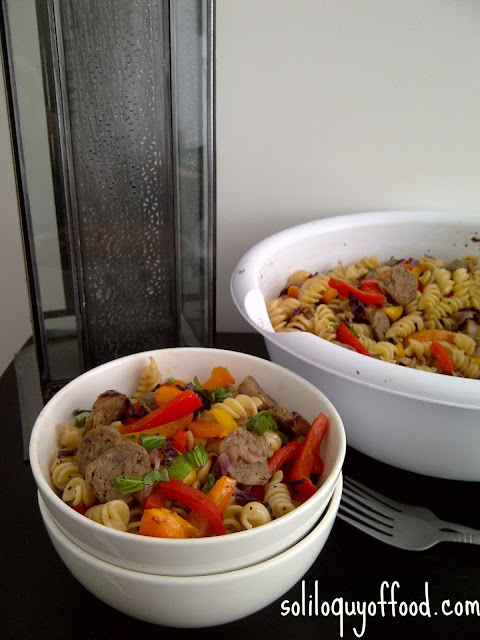 The sausage, peppers and basil lend a sweetness, that when combined with the bitter radicchio, the tangy dressing, and the heat from the hot sauce....well, it's just out of this world!

Hope you all had a fantastic 4th of July, with or without the Carl Weathers costume. There's always next year!

Cook and drain pasta according to the manufacturers instructions; cook until al dente, rinse pasta in cold water to cool, drain well.  Set aside.

Meanwhile, wash and dry peppers.  Slice each pepper in half remove the core and seeds. Cut each half across the middle width wise - slice these sections into thin strips.  Wash, core, and thinly shred the radicchio.  Set sliced vegetables aside.

Also, while the pasta is cooking, heat a large covered pan over medium-high heat.  Add the sausage links and 1/2 cup of water.  Cover and bring to a boil, then reduce to medium-low and continue to simmer for 10 minutes (a moderate bubbling simmer).  Uncover, flip the sausages over and continue to cook for another 10-15 minutes until the liquids have a evaporated, the sausages are browned, and the internal temperature reads 160 degrees.  Set sausages aside to cool.

Wipe out the pan and return it to the stove over medium heat; add 2 tsp olive oil.  When the oil has heated toss the radicchio in the pan with a pinch each of salt and pepper. Cook until just wilted, about 3- 4 minutes.  Remove from pan, set aside to cool.

Return the pan to the heat, add remaining 2 tsp of olive oil.  When the oil has heated toss the sliced peppers, dried basil, and a pinch each of salt and pepper. Cook for 5-6 minutes until the peppers have softened yet still have a slight cruch in the middle.  Set aside to cool.

In a large bowl, toss the cooled pasta with the the vinegar.  Slice the sausages links into 1/4-inch rounds, add them and their juices into the pasta bowl along with the radicchio and peppers.  Drizzle the salad dressing over top; toss everything well to coat.  Roughly chop, or tear, the basil leaves; gently fold into the pasta salad.

Cover and chill at least 2-3 hours before serving.

When ready, toss and serve.  Top with additional salad dressing or hot sauce, both optional.