Sshhhh!  Don't tell anyone there are beans in dese ninja browneezzz!
Ninja brownies, because I had to move stealth-like through the kitchen - as to not attract unwanted attention - while I opened, rinsed, and drained a can of black beans.

Once I started whirling them around in the food processor, I could ninja no more.  As if the sound was a mating call, right on queue S popped his head up from the couch like a prairie dog. 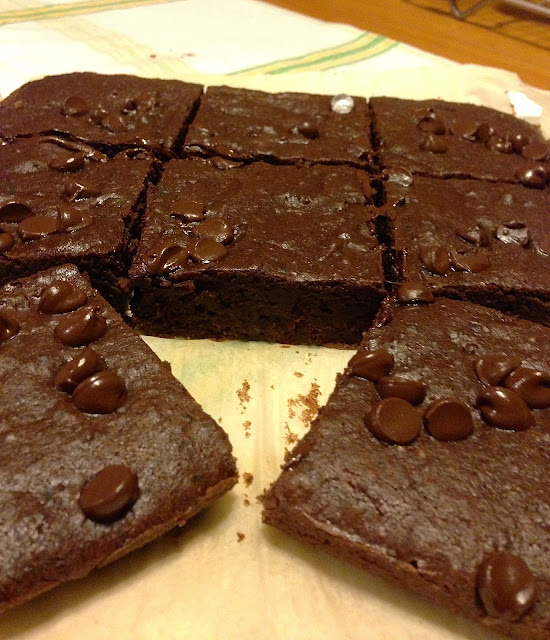 That seemed to satisfy his curiosity.  Thank goodness he has the attention span of a puppy on the weekends; he crams a weeks worth of TV, reading, internet searches,  and you tube videos into 2 days.

This was my first attempt at bean brownies and I have to admit, my expectations were pretty low.  I mean, come on...beans....in brownies.  I was pleasantly surprised, as was S!!  I didn't tell him about the beans until after he ate the brownies.  I did tell him they were a new, chocolaty, chewy recipe I was trying (technically, this was no lie).  They reminded me of Little Debbie's Cosmic Brownies, minus the chemicals and artificial stuff - come on, we've all had one before, right?  They were moist, fudgy, and chewy....all the fine qualities a brownie should have.  Obviously they were a hit - I'm lucky I snapped this pic when I did.

I originally found this recipe on Pinterest....which led me to Foodista....where I then learned that this recipe was by Andie Mitchel, CanYouStayForDinner....but I could not find it on her website.


Would I make them again?  Yes.  Absolutely!  I did only use 1 egg plus one egg yolk, as opposed to the two eggs plus one egg yolk - foods that are too eggy bother S, as mentioned before :)


Click HERE for the recipe, and try beans in yo' brownies!!