I never would have thought, not in a million years, S would choose tea over coffee. Never.  Ever.  Ever.  So imagine my surprise when he actually started doing so.  If you know him, then you know he is a coffee junkie...he runs on Dunkin (sadly missed in Canada) and The Starbucks. 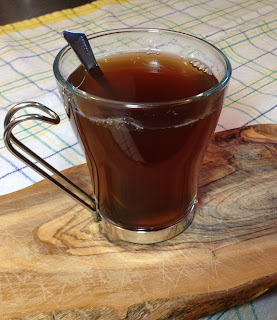 However, since the man-flu (contracted in December 2012), he has been drinking tea. Tea and only tea; preferably Chai flavored.  I love a good cup of Chai, don't get me wrong, but I'm getting kind of bored with it.

I started playing around with different spices trying to create a gingersnap cookie taste.  Yes, it would be easier to just go buy a box of gingersnap flavored tea bags, but I've been burned before on flavored teas; they either have a fake, chemically enhanced taste, or taste nothing like as described on the package.


This is suited for my taste, feel free to play around with it & make it to your liking. This is an easy version I have been making in the morning; I flip on my electric kettle, chop my ginger & measure out my spices.  While it's steeping I let Notch out & feed all the pets.  When it's done, I enjoy every sip (mostly while doing bloggy computer stuff). 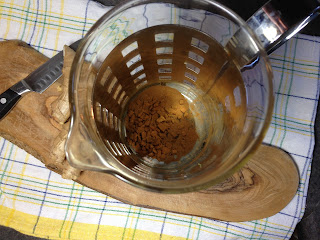 Black Tea Bags:  I use 2 tea bags; I like the balance of tea flavor and gingersnap flavors.  If you prefer a bolder tea-taste, and less of the spices, use 3-4 tea bags.  I tried 3 it was okay, a little too strong for my liking.

Chopped Fresh Ginger:  Let's not skimp on this, use fresh ginger instead of powdered, IMHO.  I use 2 tsp of fresh chopped ginger...chopped vs. grated because it's easier to strain.

Ground Cinnamon & Ground Allspice:  I use 1/2 tsp of cinnamon & 1/4 tsp of allspice, I like this ratio. It balances well with everything, you can taste them and not be overwhelmed by them at the same time.  You will get a little bit of sediment on the last sip, FYI. 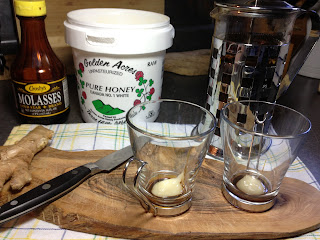 Honey:  I prefer honey with tea.  I'd like to say I use 1 tsp per mug...but if I actually measured it, it's honestly, probably more like 2 tsp.

Molasses:  This is it...the essential gingersnap flavor.  As you take a sip, you can smell the molasses, yet it is subtle in taste.  If you love molasses then you'll probably want to add a bit more.  I like molasses, but enough on it's own; I use 1/2 tsp per mug. 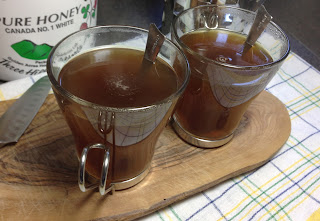 Steep vs. Boil:  I have tried both, I prefer the steeping method.  Boiling the ginger & spices makes them a little too intense for me.  I add everything into my French Press to steep, a small pot with lid will also work.

Can We Latte This?  Absolutely!  Add 1 cup of frothed milk & 1 cup of prepared tea in large latte mug. 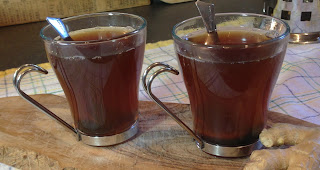 Pour boiling water over tea bags, ginger, cinnamon, and allspice.  Cover and steep for 5 minutes, remove tea bags, cover and steep for an additional 5 minutes. Meanwhile, add 1/4 tsp molasses & 1 tsp of honey into each mug. When tea has finished steeping, strain tea into mugs and stir.

Please visit my Link Party page to see where I have shared this post.
Posted by Unknown at 5:32 PM