There is no Chipotle Mexican Grill in Canada.  Sure, there are other burrito Tex/Mex places, but they are not the same. Not. The. Same. **correction:  Chipotle is in Canada, but not in my area (Alberta) **

Killer cravings have hit, so I am on a mission.

I found the post CopyCat Recipe:  Chipotle's Burrito Bowls and it was spot-on (I've made this several times), but this was for chicken...I am craving carnitas. 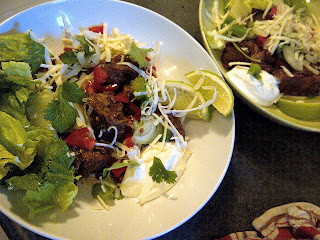 It seems all roads lead back to Homesick Texan;  Smitten Kitchen & Buns In My Oven have both adapted or tried this recipe, and have raved about it.  What the heck?...Why not?   Go Texas!


Choose a nicely marbled cut of meat with a strip of fat along the top/bottom, bone-in or boneless, it's up to you.  We prefer a good amount of chili powder and cumin with our carnitas, as I have added these to the original recipe.  If your tastes are different, use less, or omit entirely.  Again, it's up to you; you are your own boss.  I also opted to sear the meat; I just like the crust that forms when doing so.  You can skip this step, I won't judge you....cone of safety.

In a fuzz of carnitas haze/anticipation, I sliced into my pinkie knuckle while de-boning the roast (right on the knuckle).  Thankfully, I have a lifetime supply of band-aids.  Once I was all band-aid-ed up, I removed the bone from the roast, cut the boneless portion into smaller pieces, seasoned all the meat and browned it up.  As you can see I left much meat on the bone, it cooked off eventually.  Besides, Pork Shoulder Roast 1 : Kim 0. 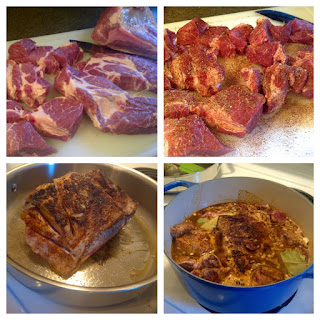 While the meat was browning, I got out my dutch oven.  I don't know why I didn't just brown the meat in this in the first place (Doh!).  I placed all of the browned pork in water, orange juice, lime juice, lime zest & spices (I deglazed my skillet and added this to the pot, as well).  Once this all came to a good simmer, I cooked over low-medium-ish heat for about 45 minutes with the cover half on. 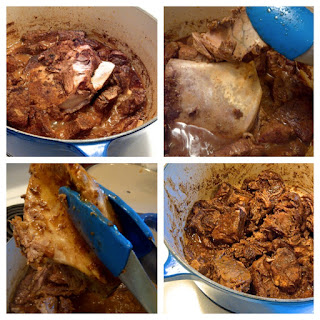 Next, this went for another 30 minutes, uncovered & cranked up to medium heat. When was finished, the meat was sizzling in the pot, getting all nice and crispy. The bone?  The meat totally pulled clean off.  Yum, yum, yum. 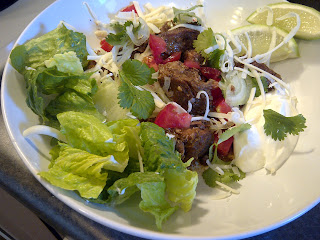 Seeing how we are laying low on the carbs, I made carnitas salad bowls.  For those of you who are carbohydrate tolerant, I hate you feel free to serve this atop a delicious tortilla, or a steamy, fluffy scoop of rice. 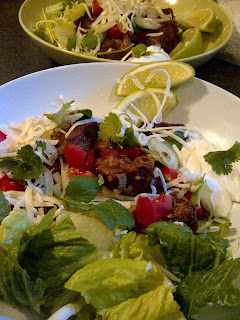 I was so happy; garnished with cilantro, lime, lettuce, tomatoes, cheddar & a little dollop of sour cream, my carnitas cravings were put to rest....for now.  Mission accomplished.

Season meat cubes and bone portion with and a few pinches each of salt, pepper, chili powder & cumin.  In a large pot/dutch oven heat oil over medium-high heat, brown meat (in batches as to not overcrowd the pot) on each side for 2-3 minutes until nicely seared, set meat aside.  Turn the heat  down to medium, add all other ingredients, stir to release browned bits from bottom of the pot, add in the browned meat.  Cook until it just comes to a boil, reduce heat to medium-low, cover halfway and simmer for 40-45 minutes.  Remove cover and turn up to medium heat, boil for 30 minutes (or until all the juices have cooked off) stirring occasionally.  It is done when the meat begins to sizzle, gets nice and brown n' crispy.  Remove the bay leaves (and the bone if using a bone-in cut), shred the meat if desired.  Serve over a handful of lettuce, top with desired fixings.