Spaghetti and meatballs is one of my go-to meals that I can make without a recipe. Growing up, my family owned an Italian-style Deli.  My Mom & Dad have probably rolled thousands of meatballs...."Time to roll the meatballs" my Mom would say as she rolled her eyes....and I don't know how she did it, every little meatball was the same size!  I was raised on these homemade meatballs, so I've learned a thing or two over the years. 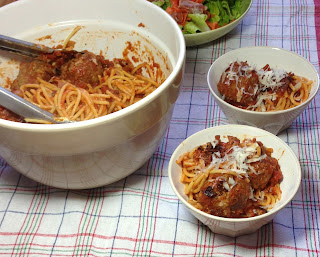 Flipping through the TV channels one day, S found a show on the Food Network, featuring Bucatini with Bacon & Meatballs.  "What's Bucatini?" he asked with that inquisitive tone, "Why have I/we never had Bucatini before?"  I knew it was a pasta, but I had to keep watching to determine which shape it was.  Come to find out, they are little, tiny straws - hollowed out spaghetti. 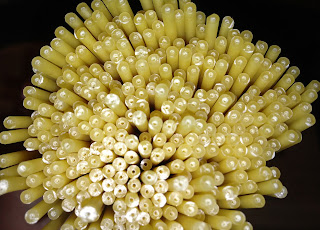 Later that week, I printed the recipe from the Internet and gave it a shot.  I couldn't find Bucatini at my local stores, so we had it with fettuccine.  With the exception of the pasta substitution, I followed the recipe exactly to the tee.  We didn't like it; it was bland and the bacon had gotten a little rubbery from simmering in the sauce. Surely something must have gotten lost in translation somewhere...I watched the episode...I saw crispy bacon in the sauce!  I had such high hopes, as they recommended Pastene Crushed Tomatoes, which is "the" brand Mom always uses.  I was disappointed with myself for not going with my instinctive meatballs and sauce recipe...even S said that "yours is better". 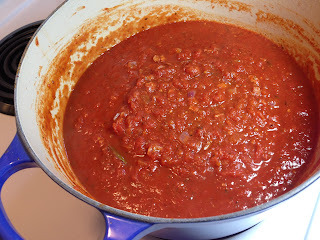 Soooo, yeah.  I'm  a bit neurotic; I carried on-and-on about this (internally, in my head, of course).  So when I found myself inside the Italian Center Shop, scouring their 52' aisle of imported pasta - for Bucatini - I was giddy with anticipation to re-make this again, with a few tweaks. 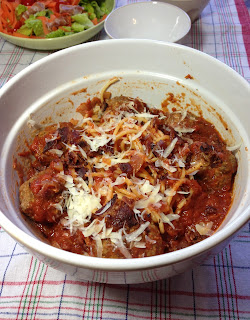 Staging:  Make the meatballs first; once they are in the oven start on the sauce. When the meatballs are finished, just add them to the sauce and simmer away. Prepare the pasta when the sauce is 20 minutes away from being finished. 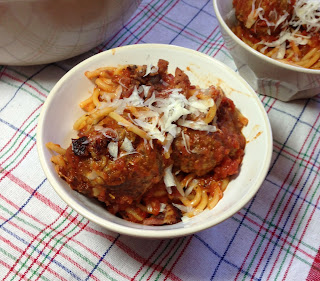 This will make 6-8  servings; it fed us 3 times that week, with a bit of additional sauce left over.

Printable Recipe
Bucatini, Bacon & Meatballs, adapted from The Best Thing I Ever Made, via Food Network
Makes 6-8 servings

Preheat oven to 400*,  line a baking sheet with parchment or tinfoil.  Add all of the meatball ingredients, except for the beef, into a large bowl, mix well.  Gently fold in the beef with bare hands until well blended, do not over overwork the meat. Score the meat into quarters, divide each quarter into 3 golf-ball-sized meatballs. Place meatballs on prepared pan, bake 10 minutes on one side, flip over and bake another 10 minutes (20 minutes total, meatballs will be nicely browned on both sides).  Add the meatballs to the sauce at the simmering stage *(see below)

Heat a dutch oven, or a large heavy pot with lid, over medium heat.  Cook the bacon 8-10 minutes - flipping half way - or until brown and crispy on both sides. Remove the bacon and drain on paper towels; skim all but 2 TBS of bacon drippings from the pan.  Add the onion, garlic, oregano, basil, thyme, salt & pepper, cook until onions are soft and translucent, about 5-8 minutes.

Deglaze the pot with 1/2 cup of water & 1/2 cup of the crushed tomatoes, stir to release the browned bits from the bottom of the pan, continue to stir and cook until the water has evaporated and the tomatoes have darkened in color (about 5 minutes).

Chop the bacon, add half of the bacon - 4 slices worth (reserve the other half for later),  add the remaining crushed tomatoes, stir well to combine.

Bring to a boil then reduce heat to low for a gentle simmer.  Give it a quick taste-test to see if it's seasoned enough for your liking.  At this point, *add the meatballs and simmer everything for about 90 minutes, stirring occasionally.  While simmering, keep the lid of  the pot open just a crack for some of the steam to escape.

For the Pasta:
1 pound of Bucatini, or your pasta of choice
chopped bacon (the remaining 4 slices worth from the sauce)
grated Parmesan, for serving

Prepare per the instructions on the package.

Return the drained Bucatini back to the pot, toss with 2 cups of the sauce and the remaining chopped bacon.  Serve the dressed pasta with the meatballs, additional sauce, and grated Parmesan.