Out & About: Subways & Hipsters

Last week S. took a few unexpected days off from work.  We decided to venture out for a subway ride and grab some lunch.  The subway system in Edmonton isn't as extensive as some other metro cities; it goes north from Century Park to Clairview.  That's it.

Having never gone to points south of the downtown area, that's where we plotted our course.  Destination:  Southgate Mall....they have an Opa! in their food court, S.'s newest obsession.  I must say, for a chain, fast food restaurant, they have the best tzatziki I've ever had.  S. had a Donair with fries and I had Calamari with a Greek Salad.  It was very good.  Donairs are very popular up here in Canada, they are the same as Gyros, just different terms for the same dish - a pita wrapped around spit fired meat topped with lettuce, tomato, onion and tzatziki, or sweet sauce.


After lunch we hit a few stores, sang the Robin Sparkles song, and lamented about how much we loathe malls.  Sean was disappointed Southgate did not have an Abercrombie store...he loves to saunter in, asking the bare chested male model/faux mannequins if they are hiring, while stroking his abdomen.  He has yet to be offered a position.

Deciding to head back north to the Health Sciences Station (I am assuming it is called Health Sciences because it is located next to the University of Alberta and the Hospitals), and upon walking several blocks in the wrong direction (it was intentional, the scenic route, he said) we began our way toward White Ave., the hipster capital of Edmonton.  I could just feel a handlebar moustache growing on me with each step.  30-minutes into our stroll, I regretted not bringing a hat.  What the heck was I thinking?    Eventually, I bought a hat and insisted we stop for a tea...and at Lush for bath fizzy balls and bubble bars.  We also finally visited Brit Foods, after driving by it a thousand times.  It's this little shop that carries only imported items from the UK, mostly grocery and tea related items.  The shopkeeper has a British accent and said "Toodaloo" FTW! 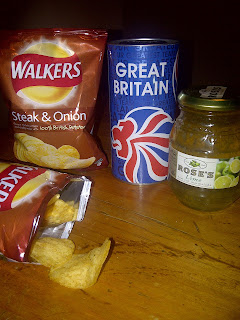 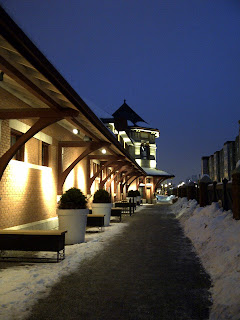 Finally, it was starting to get dark - we decided to grab a beer and then take a cab across the river home, MKT Fresh Food & Beer Market would be our final stop.  Once the Canadian Pacific Strathcona Station built in 1907, the building now hosts  "Hot For Happy Hour" & "Tap That Thursday". 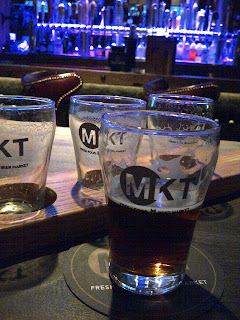 We took advantage of the $5 beers and $6 appetizers during Happy Hour....Beers, Fresh Pretzels, and Nathan's (AMERICAN HOT DOGS!!!!) Corn Dogs, oh my!  We walked all day...it was totally justified.