Out & About: City Market Saturday

Downtown Edmonton on a Saturday morning is where you will find City Market on 104 Street. This time of year however, the venue is moved indoors to the Edmonton City Hall building. 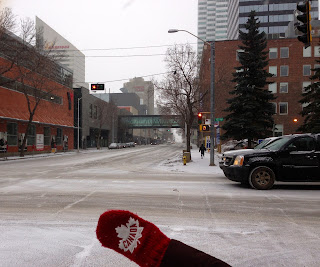 Here, at the corner of 102 Ave & 103 Street, I wanted to show this pedway.  Downtown Edmonton has an indoor pedway system; below ground, ground level, and above ground.  We are going to take advantage of this today because it's cold, windy, and a little snowy...plus we need to hit the ATM, or as they say here...ABM, automated banking machine.

Crossing the street now brings us to the City Centre (Canadian spelling), part of the pedway system.  City Centre Mall has a West and an East Building on either side of 101 Street.  If you are on the 3rd floor/Pedway level, or the 1st floor/Underground level, you can stay indoors while crossing over into the next building.  If you are on the 2nd floor/Ground level, then you have to go outside, walk down to the corner and cross the street; which is what we did. S. would NOT allow jaywalking. 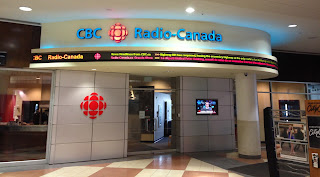 I always like to stop in front of the CBC station (it's the equivalent of NPR) located in City Centre East. They broadcast live, sometimes have musicians playing in the studio, and the headlines always catch my eye.....ooohhhh!  Shiny!!

So, now we are heading back outside...had we be down one level, we could have taken the underground pedway across the street and through Sir Winston Churchill Square to the town hall building. 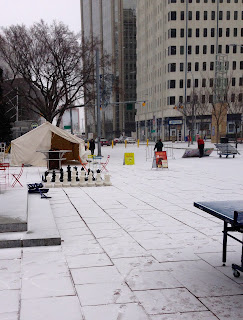 On Churchill Square was Youth Fest...they sectioned off an area for street hockey, had outdoor ping-pong, a giant sized chess board, wood fire and tent.  They also had music broadcasting over the sound system, kind of like  Carnival-meets-Russian-Folk Music. 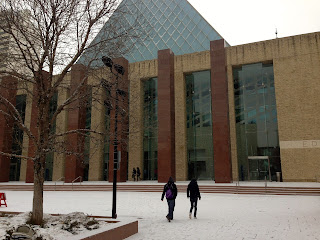 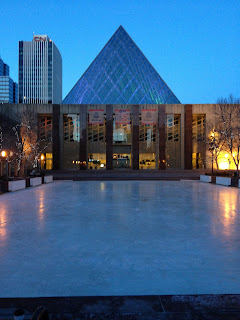 City Hall is this pyramid shaped building.  In front is the spray park/wading pool/ice rink. Nobody was skating today, the rink was covered in powdery snow.  (the second picture was taken by S. last year, at night)

Let's get sidetracked a minute....snow up here is powder...they sweep not shovel it...it's like dust. 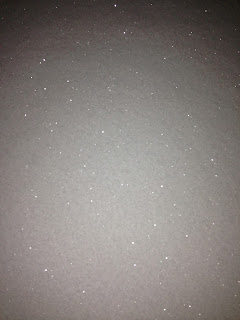 This is the sparkly snow, later at night.  If you were to blow a breath at it, it would scatter. That's how light it is. 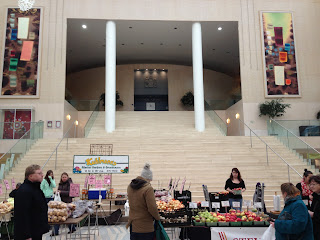 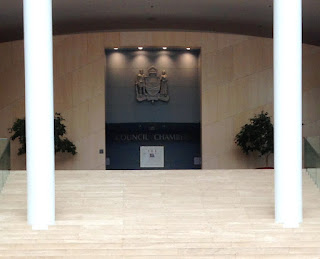 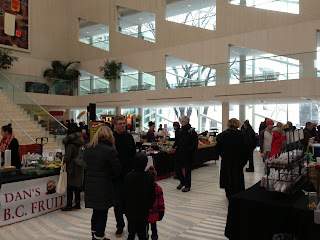 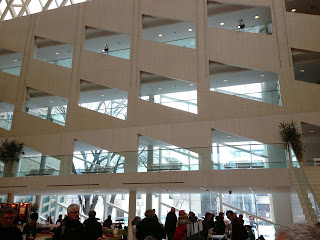 We got our goodies.  Once outside, the bells of the tower started chiming at noon.  Here is a short video...S. panorama-ed around, (don't blink you'll miss me) showing city hall, youth fest on the Square, the Edmonton Public Library - across the square from city hall, then the funky building a.k.a. the Art Museum.  The video is also on YouTube if this version won't work for you:  Click Here.  Again, another picture taken by S. last year at night...the bell tower all lit up and people skating on the rink in front of city hall. 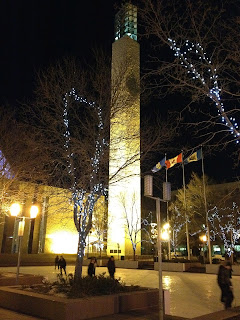 Crossing through the Square, we found a Polar Bear & an Ice Sculptor. 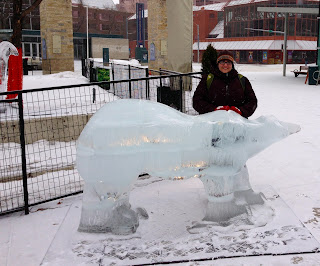 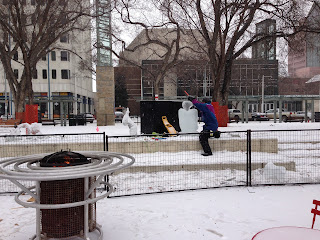 After a quick stop in the library, a hot cup of tea to go, and back through the mall, we are home.

Hydroponic Butter Lettuce, Greenhouse Cocktail Tomatoes, Mediterranean Sourdough Bread (can you see the herbs and olives in there?), and Steel Cut Oats. 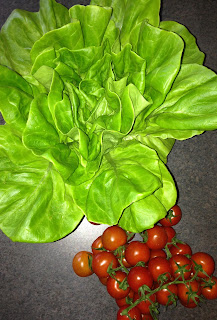 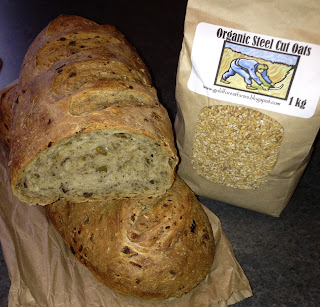 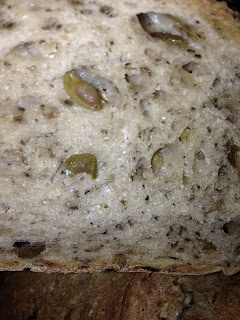 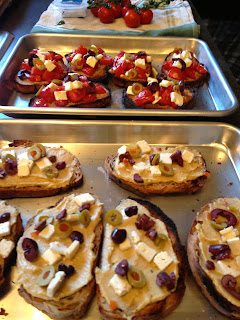 Wish you were here!